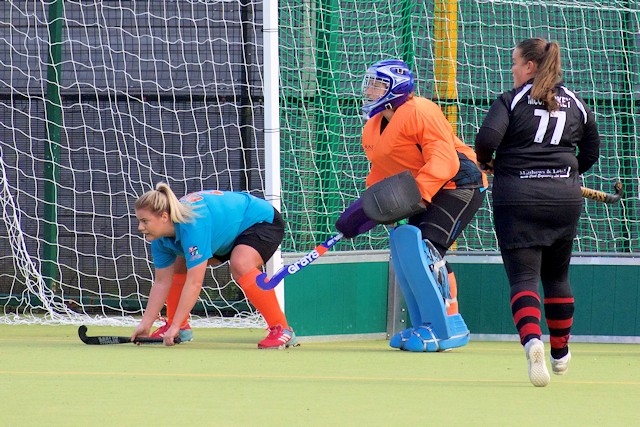 Rochdale had their first home match of the season on Saturday 2 October, hosting Bolton Ladies 2nds. Any hopes of staying dry were dashed before the match even started, and it continued to rain throughout the whole match.

Both teams started strong, but Bolton were able to make the first attempt on goal. Rochdale weren't going to make it easy for them, and Collinson channelled them out to the wings where the rest of defence had their players well marked to stop any of them getting a good angle on goal. This provided Moon a perfect opportunity to swipe the ball from Bolton and clear it up the pitch.

After foiling a later Bolton attack, Owen cleared the ball out of the D to find McDonald, who had already spied a pass over to the right wing where Pickering was placed to receive it. Pickering drove the ball up the wing before passing it off to Hodcroft who was running parallel in the midfield who in turned passed it ahead of the defender in Pickering's way to rush onto. As she neared the far baseline Pickering passed it back in to where Hodcroft was making a well timed run towards Bolton's D. She was forced back out before she could get a shot off by a pair of Bolton defenders, one of whom unfortunately intercepted her hand-off to Yates.

For the most part the two teams were well matched, with both sides frustrating the other's attempts to gain ground and have another attempt on goal. One of Bolton's advances was seen off as Collinson and Brammer closed them down to limit their options, and Partington made a great save before kicking the ball out of her D to let Hodcroft pick it up and hurtle down the pitch in the gap that had opened up.

After the halfway mark she was able to belt it up to the far left where Richardson was well placed to receive it and cross it into the D where Parton was running far post. Yet again the Bolton defence were too well organised, despite a great effort by Parton to recover the ball.

By half time neither team had scored a goal, though both had chances. Bolton made another press, but it was short lived as Moon made a clean and efficient tackle to steal the ball and was off up the pitch to pass it to Newton. A Bolton player managed to tackle her, but instantly pushed it over the sideline. Moon took the free hit, using Collinson and Palmer to switch the play around to the other wing where Pickering was able to use the open space to her advantage and flew down her wing with the ball before curving in towards Bolton's goal to cross the ball, but unfortunately Yates wasn't able to get her stick to it as she sprinted for the far post.

The first goal of the game came when Bolton were able to find a gap through and despite the effort from Rochdale to close ranks again, they were able to get their shot off before anyone could get a stick in to block it.

Bolton were able to use a similar tactic to draw out the Rochdale defence and create and overload of players in the D to win themselves a second goal.

A free hit from Owen found Newton on the left wing, who sped down the pitch before handing it off to Yates at the top of Bolton's D. Yates received the ball and turned to weave her way between the defence to get a shot. A Bolton player stole the ball from her but she span and nabbed it back, dragging it across and passing it back to Newton near the baseline. Newton passed it off to Hodcroft to take a shot, but unfortunately the Bolton keeper saved it.

A run of short corners in Bolton's favour came to an end when Collinson and Owen closed the attackers down, with Brammer acting as a barrier behind them. Bolton took a shot at goal only for Partington to get her foot to it and send it skittering down the baseline between Brammer and the goalpost before it finally drifted off the pitch.

A free hit from Brammer found McDonald, who played a one-two off Hodcroft before slamming it down the field to Richardson at the top corner. Unfortunately it was just a bit too far ahead for her to run onto, but determined not to waste their chance deep in Bolton's defence, Richardson dug in and kept up the pressure on the Bolton player until she was able to take the ball. A pass to Parton got them into the D, who then passed it to Hodcroft to take a shot on goal, only for it to be saved.

A third goal for Bolton came in shortly before Rochdale managed to snag themselves a short corner. McDonald took the hit and Collinson received it, she dragged it back before passing it off to Pickering. Her shot was blocked by the keeper. Hodcroft got her stick on the rebound, but wasn't able to keep it as Bolton's defence rallied. Final score was 0-3, with no Rochdale goals.

The player of the match was Sam Partington.

Captain Becky Knowles said after the game: "I'm proud of the determination shown today, it would have been easy to give up but our ladies kept going."