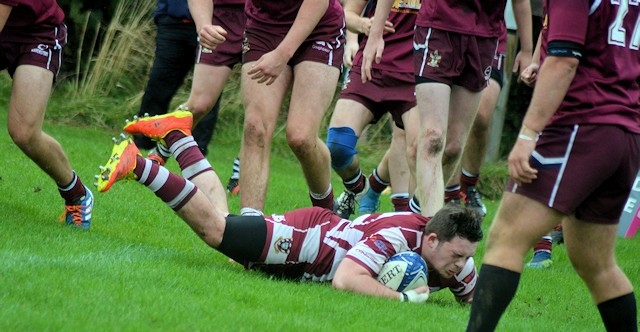 With no league game and some good results of late, Rochdale invited Morley to Moorgate Avenue on Sunday 3 October. Morley play in a higher league in the Yorkshire setup and so Rochdale were anticipating a very stern test.

Morley didn't disappoint. The conditions played a big part in the game with a strong breeze down the pitch from the start. Morley regained the kick off and were straight on the attack, with stylish handling in the conditions, and asking lots of questions of the Rochdale defence. With solid tackling and some excellent turnovers, Rochdale were able to keep the visitors at bay. Rochdale began to get a foothold in the game and had a few forays into the opposition 22 mainly off the back of a strong lineout and a very solid scrum.

However, with the wind on their backs, Morley were able to relieve this pressure with some very long clearance kicks. This was obviously a strength of this team, allowing them to turn defence quickly into attack with an effective kick-chase. From one such occurrence, Rochdale were caught in possession just outside the 22, stripped of the ball and with support arriving the Morley full back found the outside and raced to the line. The try was converted, 0-7.

The game repeated this pattern with Rochdale working down field but unable to register a score and then being thwarted by a strong defence and a good relieving kick. As half time approached, Morley were awarded a scrum just inside the Rochdale half. With a well-rehearsed move, the full back entered the line on a short pass and burst through the centre of the defence and in under the posts. The conversion was successful, 0-14.

Rochdale knew they had to hold out until half time when the conditions would be in their favour, which they duly did.

Morley cleverly changed their tactics for the second half and were dead set against kicking the ball into the strong head wind. They began running out of defence which proved rewarding as they were allowed to move up the pitch, denying Rochdale the ball. With the wind behind them, and plenty of possession from a dominant pack, Rochdale should have asserted their authority but some very basic handling errors, and a good defensive press, allowed the visitors to relieve the pressure. That said, when Rochdale got into the opposition 22 they looked to be a threat.

After some good forward play, Rochdale drove to the try line and secured a penalty in the process; Garret Myers was on hand to take the tap and drive through the defence to score. The conversion brought Rochdale within a converted try of drawing level, 7-14.

Myers repeated the dose ten minutes later with another powerful run. However, the conversion to tie the game drifted agonisingly past the left upright, 12-14.

There was still five minutes left for Rochdale to take the victory, but they just didn't have the cutting edge to break Morley down who held on for the win.

This was a really excellent game against quality opposition that will stand Rochdale in good stead for future encounters. There were lots of impressive performances, especially from the forwards with Jacob Jackson and Declan O'Loughlin making strong carries and Tom Drennan improving at his new position of hooker. The two stand-out players were Myers and Ben Sunderland sharing the MOTM award for their fantastic work rate, good carries, turnovers and tries.