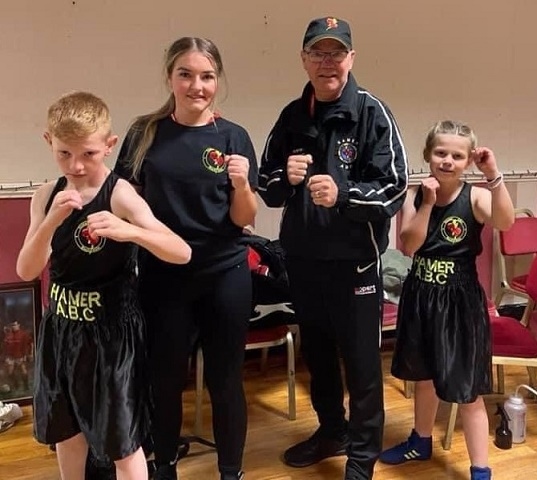 Two 11-year-old boxers made their debuts for Hamer Amateur Boxing Club when they participated in a skills match at St John’s Boxing Club in Chorlton on Saturday 8 October.

The first youngster to step into the ring that Saturday afternoon was Scarlett ‘The Starlet’ Holden, who was matched against her much taller opponent Poppy Moran, of Fleetwood Boxing Gym.

Under the rules of a skills bout, both youngsters were told only to use their jabs during the first round, which was a slight disadvantage to Scarlett because of her size in stature, but that didn’t stop the Hamer youngster constantly coming forward to take the fight to her opponent.

In her eagerness to impress, she mistakenly landed her rear-hand punch on a regular basis, which, to the delight of her supporters, constantly knocked her opponent’s head back.

In round two, both young girls were told to throw one-two combinations, which was also a disadvantage to the Hamer youngster, as her much taller opponent used her reach advantage to force the Hamer youngster upon her back foot. But as Scarlett stepped back to put her weight upon her back foot, she unloaded a solid right-hand to the chin of Moran, which knocked her head back once again.

In the third and last round, both boxers were allowed to use all of their punches, and this is where Scarlett shone bright as she constantly pursued Moran to unload punches to both the body and head. It was a great exhibition of boxing from both girls and when the bell rang to end the bout, the referee held both boxers’ arm’s up into the air to a rapturous applause from the crowd within the room.

Next up for Hamer Boxing Club was Connor ‘The Removal Man’ Middleton, who was also at a disadvantage when he was matched against another tall opponent, Lukas Maloney, of Blackrod Boxing Club. The same rules applied as above, and as both boxers came out for the first round, it was the Hamer youngster who began to force the action as he constantly stepped forward to land his jab.

In round two, Connor continued to step forward to unload his punches, and as he forced his opponent upon the ropes, he began to land punches to both the body and the head.

In the third and last round, both boxers entertained the crowd when they stood in the middle of the ring to unload a barrage of punches upon each other throughout the round. In the end, both boxers had their arms raised to another jubilant applause.

Hamer head coach Steven Connellan said: “We are excited regarding the prospects of these two youngsters, and if they continue to train hard and listen and learn, then both youngsters could have a great future within this sport of boxing.