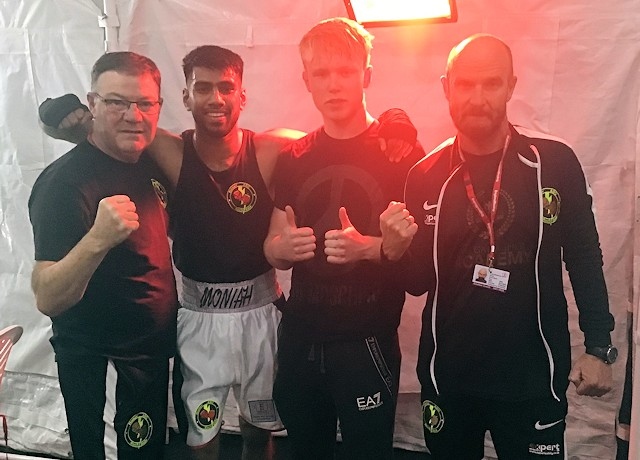 Hamer Amateur Boxing Club had another busy weekend when two of their boxers travelled to Crossacers Conservative Club in Wythenshawe, Manchester on Thursday 7 October to take up the challenge of two local boxers.

First on for Hamer was 18-year-old Aeron “The Viking” Maddocks, who met the experienced Kieran McDaid of Jimmy Egan’s Boxing Academy.

The bell rang for the first round and the Hamer boxer showed his intentions when he landed a dynamite right-handed blow to the head of his oncoming opponent. This set the precedent for a battle of pure aggression, as both boxers stood toe-to-toe in the middle of the ring whilst inflicting heavy punishment upon each other. As the round progressed. Aeron landed a jab to McDaid’s body, before finishing off with another crushing right hand to the chin, which instantly sent his opponent’s head back.

At the start of round two Aeron instantly landed another solid right hand to set the tone for another barnstorming round, and both boxers didn’t disappoint the crowd who were very vocal in the tightly compacted venue. Although the pace was extremely tiring, both boxers tried hard to unload a continuous barrage of punches, but as the seconds ticked away it was Aeron’s punches that began to take effect, just as the Jimmy Egan’s boxer began to slowly tire and hold onto his Hamer opponent.

In the third and last round both boxers continued to entertain the boisterous crowd as they stayed in the centre of the ring whilst landing punch after punch upon each other. It was local Aeron who successfully landed the last telling blows after every exchange, which gave him the victory.

Next up for Hamer was 20-year-old Mahbub “Real Money” Miah, who met another Jimmy Egan’s boxer in the shape of Declan Smith.

When both boxers were introduced to the crowd, the roof seemed to momentarily lift itself up off the building, such was the incredible noise that came from the vibrant, passionate crowd. The volume of noise continued throughout the contest when both boxers showed their eagerness to entertain their supporters, as they exchanged well aimed punches upon each other. Mahbub forced the action, whilst Smith counter-punched his Hamer opponent with swift combinations, before using clever head movement and footwork to stay out of range. This continued throughout the round, with the Hamer boxer constantly pursuing his opponent, who was slowly beginning to tire.

Before the start of round two, Hamer coach Steven Connellan told Mahbub to change tactics and allow Smith to open up with his punches first, before landing counter-punches of his own. The bell rang for the second round and Mahbub followed his instructions to a tee when he allowed Smith to throw his punches first, before stepping out of range to make him miss, then the Rochdale boxer stepped back into the action to unload a constant barrage of sensational right hands to the head. This continued throughout the round and at one point it looked as though Mahbub would stop his opponent, such was the bombardment of blows he inflicted upon Smith.

The third round was to be the decider on who would take the victory and Mahbub stepped back into the middle of the ring to pursue his opponent, before unloading clever counter-punches, which continued to connect and effect Smiths momentum. In the end the Hamer boxer conquered his tiring opponent to win the contest by a split decision.

On Saturday 9 October Hamer Boxing Club travelled to Spartan Amateur Boxing Club at Bluechip Business Park in Altrincham, Cheshire try and make it a hat-trick of victories for the club, when 15-year-old North West Region Champion, Kieren McMenamy met Sonny Hughes of Mickeys Athletic Boxing Club, Barnsley for the Class B, Junior Development, National Quarter Finals. Sadly, it was not to be, when Hughes had his arm raised in victory after three hard fought rounds.