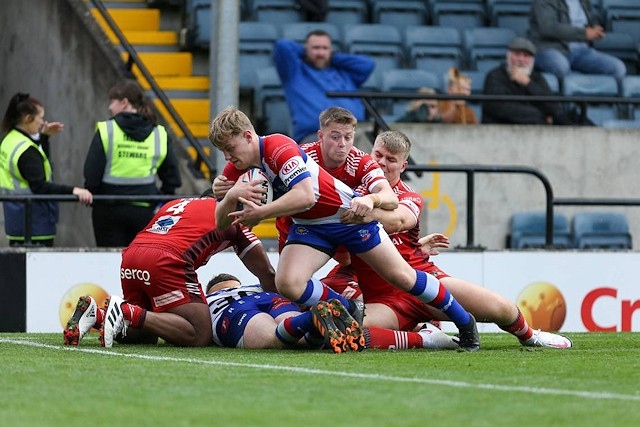 Rochdale Hornets is delighted to announce the signing of talented youngster Cian Tyrer.

Tyrer originally joined the club during the 2021 campaign on loan from Newcastle Thunder, and has now made the move permanent for the 2022 Betfred League 1 season.

The 20-year-old can feature at fullback or on the wing, and is excited to be with the club for the upcoming season.

“I’m absolutely over the moon to be here,” Tyrer said.

“I loved my loan period here and was gutted we didn’t make the play-offs in the end.

“Now I am here for the full season I’m looking forward to take more responsibility and to give my all to get the club where it belongs and win the league this year.”

On the latest addition, head coach Matt Calland said: “Cian really impressed me while he was on loan from Newcastle and he showed a great appetite for work.

“He has plenty of pace and is very elusive when returning the football.

“He can play wing or fullback and gives us great options in the outside backs.

“Originally from Leigh Miners, he then came through a very good academy system at Wigan.”

Chairman Andy Mazey added: “Cian is a player Matt was keen to bring to the club having coached him while on loan from Newcastle, so we are delighted to bring him to Hornets for 2022.

“Cian has that valuable commodity of pace and is the sort of player who can make a break and ask questions of opposition defences.

“He’s a great lad from a good family and I’ve known his dad Christian, a former professional himself, for many years and his grandad Colin Tyrer needs no introduction in rugby league circles, so the pedigree is second to none.

“Crucially having spent time here he wanted to stay and be part of what we are building at this club despite the challenging times we are navigating.”

Head coach Matt Calland recently signed a new deal for 2022 with Rochdale Hornets and has now bolstered his squad with new contracts for forwards Zac Baker and Paul Brearley.

Baker returned to Hornets prior to the 2021 season after a year in Australia. He was a stand-out forward for Hornets in 2021, and says he’s excited to have his future secured.

"I am over the moon to sign again for my hometown club,” he said.

"My decision was made a lot easier when I found out Matt Calland was carrying on again next season. I think a lot of the boys want to repay him for everything he’s done for them in the past.

"Next season I hope we can cement that play-off position and have a massive push to get Rochdale Hornets back in that Championship!"

Now, the former Mayfield forward will link up with head coach Matt Calland for pre-season and enjoy a full season at the Crown Oil Arena.

“The decision was made based on how much as a team and personally we under achieved last year,” he said.

“We never managed to get any real momentum due to injuries and Covid. I really believe if we keep the core off this group together we can have a real go next year and I want to be a part of it.

“Playing under Matt (Calland) again has been great, and our 2022 goals have to be promotion, although it will be a very tough league with a few local derbies that we will look forward to.”