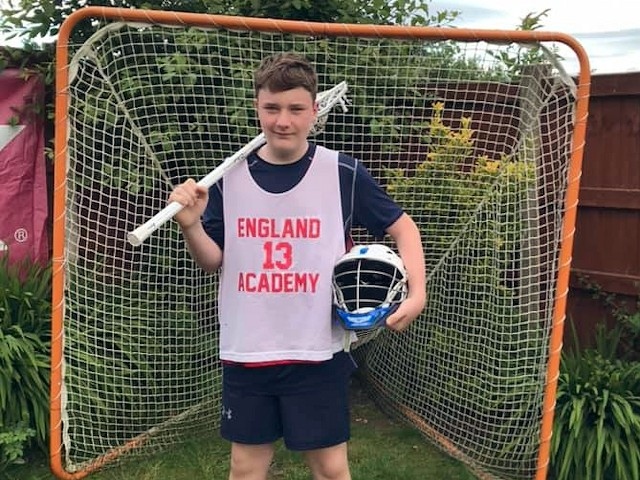 England lacrosse player Troy Swanick, of Rochdale, is hoping to represent his country on the international stage now his chosen sport has become an Olympic event.

Troy, 15, who is in his final year at Whitworth Community High School, has been playing lacrosse since he was at Healey Primary School, Rochdale.

He said: “Coach Chris Birchenough, from Rochdale Lacrosse Club, came into my school and showed us how to play the sport. He was there for a few weeks and then my friend and I decided to join the club.

“We went for a trial at Rochdale, and after a few weeks we got on to the under 10s team and I have been playing ever since.”

Troy, from Shawclough, currently plays for Rochdale U16s lacrosse team, the Lancashire U17s team and for the past three years he has been a member of the England Lacrosse Academy.

He said: “Lacrosse is a bit like hockey and you have two nets and similar protective equipment to hockey; it can be brutal.

“There are two types – field lacrosse and box lacrosse. In field you play on grass on a large area and have 10 players on each side and in box it is a hard surface, a bit like playing ice hockey, and only six people on each team.”

The object of either version of the game is to use a lacrosse stick, which has a net on the end, to catch, carry, pass and throw a solid rubber ball with the aim of scoring in the opponent's goal.

Troy said: “I play field lacrosse and I like playing attack because I like to score goals.”

Three years ago, coaches at Rochdale put Troy forward for trials for the England Lacrosse Boys Academy and he was accepted for the under 12s team.

The academy is a stepping stone onto the talent pathway which could lead to a place in the England international team.

The Rochdale team Troy plays in is a combination of players from Rochdale and Stockport-based Brooklands and they train every Wednesday, while on a Monday he trains with the Rochdale senior team.

He plays games every Saturday in a league and trains with the academy once a month.

Troy said: “I would like to play for England and, as lacrosse has now been accepted as a new Olympic sport, my ambition is to be able to play for my country in the Olympic team.”