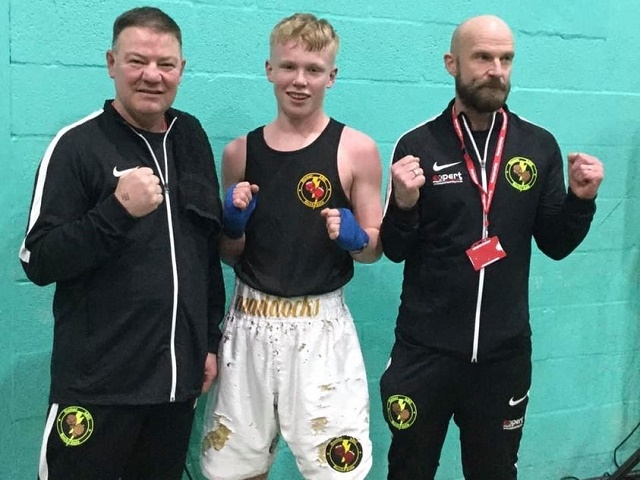 On the sound of the first bell, both boxers charged to the middle of the ring to exchange a heavy bombardment upon each other, which instantly had the excited crowd upon their feet. The action continued until Aeron gained the momentum by forcing Morley onto the ropes to unleash a savage barrage of punches to both the body and head.

Aeron had met Morley before in the ring on two other occasions and although they had been closely fought contests, he had tasted defeat from the hands of Morley both times.

This time he and his Hamer coach Steven Connellan worked out a strategy not to stand off Morley and try to out box the experienced counter-puncher, but to time his action and steam forward and stay close to his opponent whilst unloading a multitude of punches to both the body and head.

The strategy was starting to work as Aeron continued to press forward and Morley began to hold onto his opponent, which led the referee to step in and separate both boxers, which stifled Aeron’s momentum a little.

At the start of round two Morley began to use his feet more and he began to catch Aeron as the Hamer boxer stepped towards him whilst looking for an opening. This continued for about a minute until Morley began to slow down a little, which allowed Aeron his chance to gain his distance and he planted effective punches to the pit of his opponent’s stomach, before landing savage hooks to the head, which instantly had Morley holding onto the Hamer boxer once again.

Then just as Aeron was about to unload another determined attack, Morley’s head guard came loose for the third time, which instantly stopped Aeron’s momentum and he had to wait until the last thirty seconds of the round to continually force his opponent onto the ropes with another cascade of solid punches to both the body and head, before the bell sounded to end the round.

By the third and last round, the pace had slowed down a little, although both boxers continued to unload heavy punches upon each other. Then with around twenty seconds to go, Aeron landed a double jab, followed by savage right-hand to the chin, which clearly hurt Morley and he instantly held onto the Hamer boxer before the referee stepped in to separate both boxers and tell Morley to keep his head up.

From that moment on, Aeron unloaded continuous punches until the bell rang to end the contest and all three judges awarded the Hamer boxer his victory by unanimous decision.

Quite incredibly, Aeron had to travel to the same venue three days later to meet Nathan Danson, of Technique ABC, for the North West region semi-final, which was another bout that had the crowd upon their feet as both boxers stood toe-to-toe unloading savage blows upon each other throughout the whole three rounds.

It was a very closely fought contest that could have gone either way, but to Aeron’s torment, Danson had his hand held up into the air, gaining victory by a very close split decision.