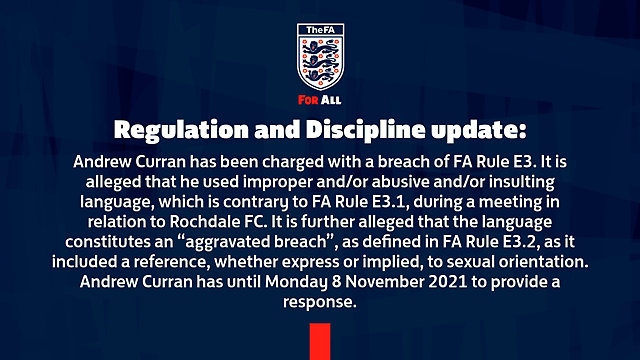 Statement from the FA

Andrew Curran has been charged with breaching FA rules after being accused of calling members of the Rochdale AFC board of directors 'Nancy boys'.

Mr Curran, part of a takeover bid by Morton House MGT and First Form Construction Ltd, was also alleged to have called the people of Rochdale 'small minded'.

The slurs are understood to have been made during a Zoom call between the EFL, Rochdale AFC, Mr Curran and others during the summer.

The FA said in a statement on Thursday (28 October): “Andrew Curran has been charged with a breach of FA Rule E3.

“It is alleged that he used improper and/or abusive and/or insulting language, which is contrary to FA Rule 3.1, during a meeting in relation to Rochdale FC.

“It is further alleged that the language constitutes an ‘aggravated breach’, as defined in FA Rue E3.2, as it included a reference, whether express or implied, to sexual orientation.

“Andrew Curran has until Monday 8 November 2021 to provide a response.”

Mr Curran was part of an attempted takeover of Rochdale AFC by Morton House MGT which became subject to an EFL investigation into whether 'any relevant person(s) and/or any persons wishing to acquire control of the club complied with the requirements of the Owners’ and Directors’ Test (OADT)'.

The 'takeover' was abandoned in August after those involved withdrew from the EFL OADT test.