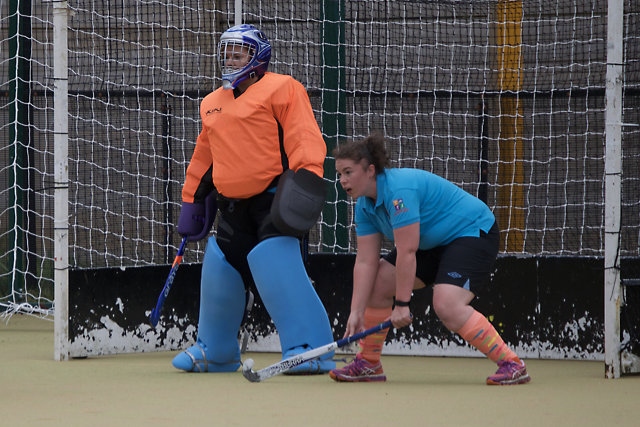 Keeper Sam Partington and player of the match Kate Brammer

This weekend Rochdale were away at Parrs Wood to play Didsbury Northern 5ths on a dry, windy and sunny day.

Without some of their regular players, the sun glare in their faces for the first half, and up against a team with substitutes, the deck was stacked against Rochdale, but they played their hearts out with grit and determination.

A Didsbury attack down the wing was channelled out by Pickering, allowing Collinson to tackle and claim the ball before passing it back to Pickering to drive the ball up the wing. Didsbury won it back, but Pickering nicked it away from them before they made any progress and passed it up the wing to Yates. Despite some good work with forwards Burrell and Parton, Didsbury were able to intercept the ball and get the play out of their defensive zone.

A free hit from Brammer found Richardson on the right wing, who drove the play up before digging in when a Didsbury player got in her path, turning to open her options before pivoting into a tight roll-out down the sideline to escape the opposition player. Nearing the baseline she curled in towards the D and passed the ball off to Burrell who took a shot at goal, but the keeper got a glove to it and the ball deflected out of play.

Despite some good defensive work, Didsbury were able to secure themselves two goals, one from a short corner and the other by creating an overload on Rochdale's defence. A decisive stop and clearance from Brammer found Hodcroft in the midfield, who weaved her way around a number of opposition players before handing the ball off to McDonald who in turn hit it across the field to Yates on the far wing. Yates drove it up towards Didsbury's D before handing it off to Parton who took a shot on goal that just landed wide of the post.

Partington continued a run of excellent saves by blocking a high strike with a glove before kicking it out of her D, Collinson quickly snagged it to clear it off up the pitch and deep into the midfield where Hodcroft collected it to pass it up to Burrell who had tracked back to help Rochdale defend. They started to drive it up the pitch, and using Yates and Richardson on the wings were able to keep play in the midfield for a while, but Didsbury blocked them from progressing further until they finally won the ball back.

Didsbury almost snagged themselves another goal, only for it to be disallowed because the umpire had already blown for a foul. Unfortunately a few plays later they won a short corner and were able to utilise it to get a goal. At half time Rochdale were three nil down, but were happy with how they were playing, and after a quick pep talk and drink were ready to get back into the game to try and turn it the score around.

A Didsbury run down the wing was stopped by Yates as the player tried to lift the ball over her stick, to no avail. Yates took off down the pitch with her prize, before passing the ball to Hodcroft to drive it into the D for a shot that was saved by the keeper. Richardson scrambled for the deflected ball, but Didsbury were quicker and cleared it.

Later a Didsbury break down the centre ground was interrupted by Collinson, blocking out the run and forcing a pass to an opposition player directly in Brammer's path. Before they had time to correct Brammer had swiped the ball and passed it off to Pickering on the wing. Pickering started a run before tapping it to McDonald to start a run of quick passes between them to avoid their opposition before crossing it to Richardson near the D. Richardson ran into the D and took a shot, but unfortunately just wide of the post. A free hit from Brammer found a gap through the Didsbury press and went flying down the pitch all the way to Burrell in space. With her run into the D interrupted by a Didsbury defender, she passed it off to Parton who clocked Yates' run toward post and aimed the ball for the deflection in.

Their plan was disrupted by a Didsbury defender intercepting the ball and sending it back out of the D. A free hit from Pickering found its way to Richardson down the wing via McDonald providing a detour around the Didsbury player. Richardson made another run down her wing and turning towards the D and crossing it to Parton, who turned for a shot on goal, only for the keeper to save it and kick it away.

Partington showed off her skills with another fantastic save by almost landing in the splits as she stretched her foot to decisively stop a Didsbury strike, and the Rochdale defence bought her time to stand up again by ensuring it was cleared well out of their area. Didsbury were awarded another short corner and were able to snag themselves a fourth goal. Rochdale tried to push back, with Hodcroft and Richardson making a strong run on the Didsbury goal using one-twos down the wing, but the Didsbury defence were able to block any goal attempts. Neither team were able to secure a goal in the remainder of the game.