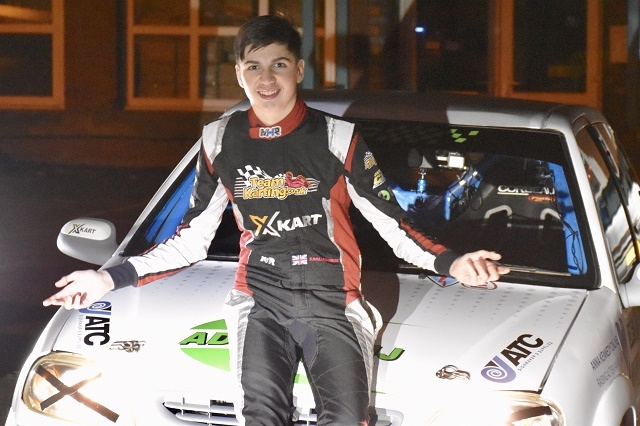 A 14-year-old racing driver from Rochdale has hosted a film premiere, detailing the story of a fellow racing star with autism, and has unveiled his new racing car.

Sandro Ballesteros, who is currently in year 10 at Wardle Academy, hosted the UK premiere of the US film ‘Racing with Autism – Austin Riley’s Road to Inspiration’ at TeamKarting in Rochdale on Saturday 30 October.

The film follows the Riley family across the country as their son, 22-year-old Austin, who also lives with autism, chases his dream of becoming a professional race car driver. Shortly after filming, the Riley family came to the UK for a tour in 2017 and met Sandro and his family. Austin presented at Sandro’s school and inspired Sandro to begin his own ‘Able Racing’ Project, presenting to schools and leading to him receiving a national autism award.

Sandro was diagnosed with autism when he was three and sat in a kart for the first time aged five. Racing is now his passion and his story is extremely similar to that of Austin.

On Saturday, more than 40 guests visited TeamKarting in Rochdale, where Sandro discovered his own talent for karting. As part of the event, his new Citroen Saxo racing car was revealed to guests in a surprise unveiling. Sandro has worked tirelessly to secure partners and sponsors to make his dream a reality and is now being backed by a range of local businesses.

Having completed multiple karting championships and winning countless races, Sandro is stepping up to car racing, helped by his friend and mentor Matty Street of Team X-Kart and TeamKarting who welcomed Sandro onto his new ‘Karting to Cars’ initiative earlier this year.

Sandro competed in his first ever car race at Brands Hatch this weekend in the season finale of the Junior Saloon Car Championship. He will then be working hard over the winter to gain additional funding to compete in the whole championship which begins in March.

Sandro explained: “Saturday was very special for a number of reasons. It was an honour to host the UK premiere of Austin’s film. Austin’s story is so similar to mine and it’s great to see him sharing his story in this way and raising awareness of autism.

“I also had the chance to reveal my new racing car to our guests and friends. I’ve worked so hard to get the funding and support I need to step up to the next level of motorsport and I can’t believe it’s finally happening.

“I’d like to thank everyone that has helped and supported me. I’ll be giving everything I can at Brands Hatch, learning as much as possible ahead of the 2022 season.”

The Racing with Autism film showing Austin Riley’s story is now available to purchase and view via www.racingwithautism.com.