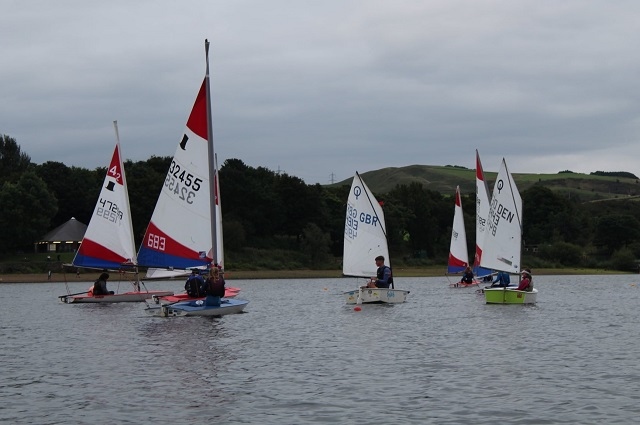 Once again, the Solo class dominated the results. Overall, it was a day for Nick Hornsby who won the second and third races. However, Mike Smith won the first one, ahead of Martin Brennan. He had a five-second advantage on handicap over Richard and Heather Marsh in the speedier RS400.

As the wind increased, the attentions of the safety boat crew were needed as capsizes happened and a couple of boats needed to be towed back.

Credit must go to the junior sailors who raced. Jacob Din, in a Laser, was third overall on the day with a second place in the last race, coping well in the conditions. Hector Droungas, in a Topper, was fourth overall with steady results beating his rival, Jasper Bramwell, by 10 seconds in the first race. Eleven-year-old Xavier Bramwell, also in a Topper, battled to finish that race in 8th place.

The Laser Class were holding their Inland Championship at Rutland over the weekend where Daisy Fisher finished 11th overall, out of 57 boats, and 2nd female sailor.

In the Lake District, despite the high water levels on Windermere, the GP14 End of Season Championship was held and Adam McGovern and Eleanor Wheeldon finished 4th overall.