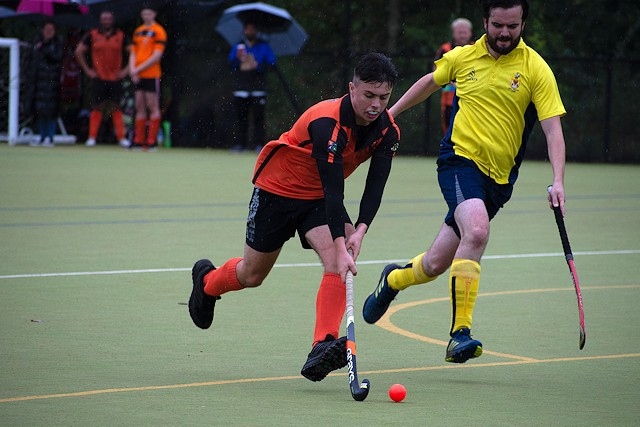 Stephen Hirst was named man of the match

Saturday (6 November) saw Rochdales Men's 2nd team looking to build on their previous week's 3-2 away victory at Bolton. Visitors Bury 2nds would be a similar challenge to Bolton as both sides have played each other many times in both league and pre-season.

Captain Adam Massey had a full strength Rochdale squad to choose from including Affan Burki, who had flown in from Belgium to make the game. Rochdale started with their usual half court press, allowing Bury the ball in their own half, but putting them under pressure once they moved into Rochdale's half.

After a couple of Bury attacks were turned over, it was clear they had no answer for the speed and skill of both Stephen Hirst and Bjorne Brauns. Time after time Hirst drove from left back all the way to the Bury baseline, skipping around the Bury midfield and defence with ease. It was from one of these attacks that his cut back pass to the top of D and struck on goal, Kane Morgan was perfectly positioned in front of the keeper to deflect it and was unlucky not score, but a great save from the Bury keeper kept it out. Quickest to react was Rochdale captain Massey who tapped it in for the opening goal.

Rochdale continued to grow in confidence and dominate the midfield and by half time Morgan had added to the score line with a well deserved goal.

At half time Rochdale knew that 2-0 wasn’t enough and Massey called for concentration and a quick start to the second half to maintain the pressure on Bury. With almost the first attack of the half Brauns picked the ball up in his own half and drove towards the D, cutting through the defence he struck the ball as soon as he entered the D. The keeper stood no chance as the ball smashed in to the backboard to make it 3-0 to Rochdale.

That all but finished the game off as Rochdale continued to dominate, seeing the game out with some fantastic play including Adam Boodeea showing great maturity up front, in holding the ball up against a much bigger and experienced defence.

Captain Adam Massey said: “Today was one of the best games we have played, in both our overall team play, game management and individual skill. The whole team played fantastically, but Stephen Hirst was outstanding and fully deserved the man of the match.”