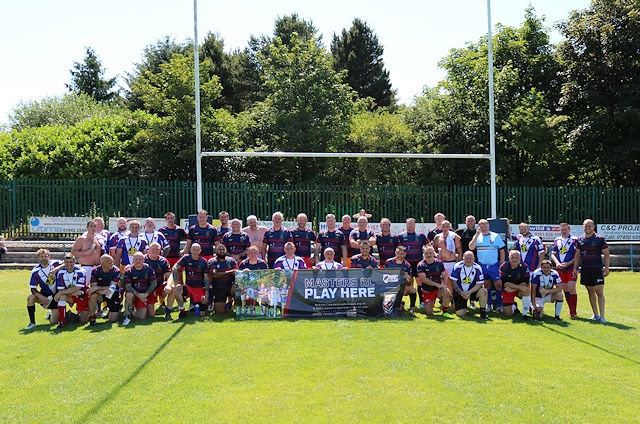 Rochdale Masters played their last games of the season on Saturday (6 November), finishing in fine style on a dreadful day more reminiscent of the old winter Pennine league days that most of these players were brought up in.

Injuries and arthritis decimated Carl Abraham’s squad and Rochdale travelled with a bare 13 to take on Cadishead Rhinos and Batley Boys. Included in the 13 was debutant Andy Reid, who certainly made his presence felt as he crashed through the line for two tries against hosts Cadishead.

In horrible conditions there were some great performances from the Rochdale side none more so than Scoffer Schofield and ‘Browny’.

Rochdale managed three tries in the first game against Cadishead and were held to a scoreless draw in the second against Batley. Both games were hotly contested with no shortage of skill from both sets of players.

This Saturday (13 November) sees the Veterans Masters take centre stage as they take to the field in a match to commemorate Remembrance Sunday.

This year sees the match bring played at the Mayfield Sports Centre with Mayfield chairman Neil Ramsden commenting: “This was a no brainer; when Carl Abraham asked me if Mayfield would be willing to host the game, I said yes immediately.

“We all owe these lads a debt and it is mine and Mayfield’s honour to welcome them here on Saturday.”

Carl himself is proud of the fact that he has managed to accommodate the fixture especially as his Rochdale Masters side has six representatives taking part in the game.

Anyone wishing to come and offer their thanks to the veterans or just come and watch a game of rugby will be given a warm welcome at the Mayfield club.

The game kicks off at 1pm with the bar open from 11am for spectators.