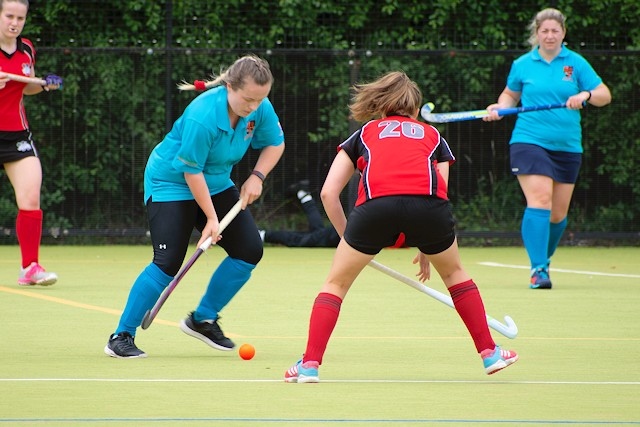 Dionne Collinson was named player of the match

Urmston won the first push back, but Rochdale quickly showed that they weren't going to make it easy. An Urmston attack was seen off by Brammer channelling them out to Rochdale's left wing, and when they attempted to turn and pull the play into Rochdale's D, Collinson intercepted the ball and used her reverse to nip it between the players legs before running onto it to sweep it out and clear it. A Rochdale attack resulted in a short corner in their favour, they decided to change things up and Owen joined the forward and midfield players at top of the D to take the strike. They got a couple of good chances, and a second short corner, but unfortunately they didn't find a way over the goal line.

After another Rochdale attack was knocked off the baseline, McDonald took a long corner and passed it out to Pickering on the right wing. Pickering used her quick footwork and v-drags to effortlessly weave her way around the three players in her way before passing it off to Burrell in the D. Burrell took a shot, which was saved by the keeper, but Burrell was ready for the rebound and quickly lifted it over the keeper's boot and Yates was ready and waiting on the post to help push it over the goal line.

Urmston made another run towards Rochdale's goal down their left wing but Palmer was able to channel their runner out and force a pass that lead Urmston right into the path of Owen, who easily swiped the ball out of their possession and knocked it back down the pitch to Knowles. Knowles passed it out wide to Yates who circled around an opposition player to tap it back to Knowles for a shot on goal that was saved.

Another short corner presented Hodcroft the opportunity to take a strike the instant she was into the D and she pelted it into the net for a goal. Brammer took a free hit and smashed it up to Hodcroft in the centre ground. She hurtled down the pitch before crossing it in the D to where Pickering had run in and was clear to collect the ball and strike it into the net for the third goal of the game. Urmston worried the Rochdale defence when they were able to drive the ball into the top of their D, but their options were limited as all their players in the D were marked out.

When Urmston were finally able to find a strike, Hoyle saved it before kicking it away to the side. Collinson collected it to ensure it left their D before passing it up to McDonald in the centre, who it turn hit it up to Burrell. Burrell drove it towards the D before passing it off to Richardson as she ran in, who took a shot that flew just the wrong side of the post.

Knowles intercepted an Urmston pass and handed it off to Burrell on the left wing, who received the ball and drove it in to the D. With Urmston's defence still tracking back Burrell had only the keeper in her way. The keeper was blocking off the nearest post, so Burrell took the hit on her reverse side into the far post and secured a goal.

An Urmston free hit from the sideline in Rochdale's defence area came down their right wing, channelled out until finally they were able to find a way into the D across Rochdale's reverse side. An Urmston attacker ran into the D to receive the cross to hit it into the goal, ending Rochdale's clean sheet.

Richardson tackled the ball from an Urmston player only to end up on the floor when the player tried to take it back. Collinson grabbed the ball and was away up the pitch as Richardson quickly hopped back to her feet and followed to provide back up. Once in the opposition's last quarter of the pitch, Collinson passed it up to Burrell who ran it around a defender to tap it to Hodcroft, who in turn crossed it square to where Collinson had run to the penalty spot, who received it and slapped it into the goal.

A series of quick one-twos between Hodcroft and Pickering along the right wing drove the ball up high into Urmston's defensive area, before whacking it into the D where Burrell was able to get a stick to it in an attempt to deflect it in. Richardson had run post and got her stick to it to direct it the rest of the way into the goal.

The player of the match was Dionne Collinson.

Captain Knowles said: “What a performance! Each and every single player worked their socks off today and it finally paid off. Happy Saturday!”