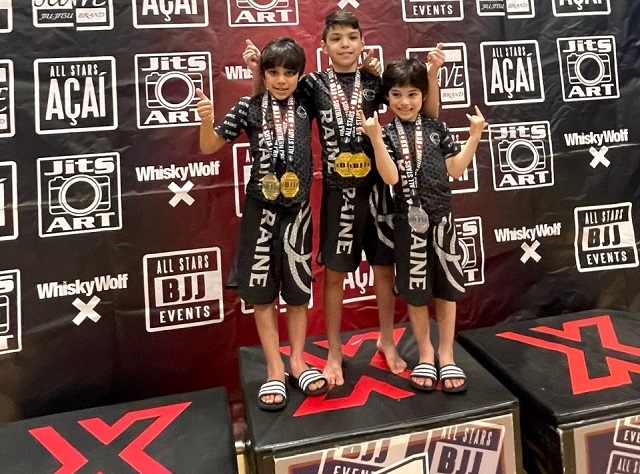 Collin, Andrew and Ethan Perez at the All Stars tournament

Eldest brother Andrew, 11, won double gold at the All Stars Brazilian Jiu Jitsu Southern Pro near London on Sunday (14 November) after landing gold in the Nottingham Open the previous weekend. The Holy Family pupil holds a grey belt and competed in the 34kg in both gi and no-gi categories.

And whilst youngest brother, Ethan, seven, was the only contestant in his category, the white-belt fighter was not deterred, challenging himself to fight in a heavier category where he secured double silver. Ethan, who attends St Vincent’s Catholic Primary School with Collin, also managed to win gold at the Nottingham Open the previous Sunday.

Dad Carlos said: “The boys had high-quality competitors and tough fights. We cannot describe how proud we are of our boys, as all their hard training has paid off.”

The boys’ parents are considering taking Andrew to the IBJJ Kids Pan American World Championships in Los Angeles next year, the biggest children’s jiu-jitsu tournament in the world, and will soon start raising money to help with the costs.

All three brothers train at Team Sukata in Warrington under the coach, black belt Lee Simpson. As well as Brazilian Jiu-Jitsu, they train in Judo at Bacup Judo club and Judo Excellence Club in Hebden Bridge, wrestling at Bolton Wrestling Club and Thai boxing at Valley Thai Boxing Club in Whitworth.

Carlos added: “We can’t thank enough their coaches for all the amazing knowledge and skills passed to the boys.

“They wouldn’t be where they are without their support, and we also want to thank their sponsors RAINE Clothing Ltd and Valor Fightwear for all the support towards the boys.”