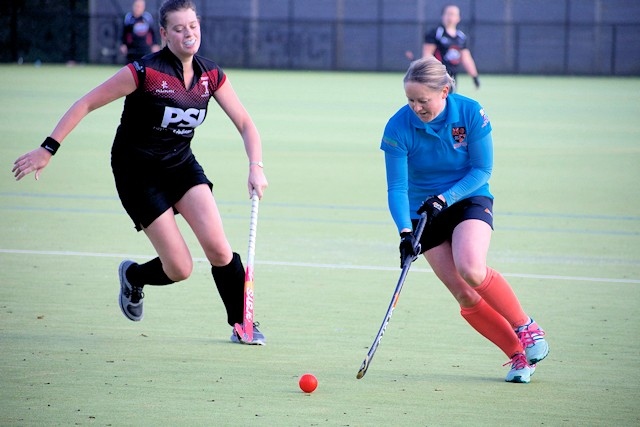 Kie Leech was named player of the match

Rochdale were away at the Armitage Centre in Fallowfield on Saturday (20 November) playing City of Manchester 2nds.

Up against a team with the maximum substitutes and missing a couple of their regular players, Rochdale knew they'd have an uphill battle, though they weren't going to let that deter them. Having won first pushback, Rochdale went on the attack. Burrell passed to McDonald who crossed it to where Hodcroft was already making a run up the pitch, handing it off to Yates who was shadowing her on the wing. She feinted around the opposition player in her way before crossing the ball to Hodcroft in the D, who took a strike that went just wide of the goal.

Manchester retaliated with their own push, driving the play into Rochdale's defence, though initially channelled out by Collinson they were held out of the D by Brammer, forcing them to switch the play around the midfield and try again. Owen was waiting for them at the top of the D and easily swiped the ball and hurled it down the field. Unfortunately Manchester successfully tackled for the ball to make another attempt for a goal.

With the advantage of numbers in that area of the pitch, this time they were able to get into Rochdale's D, though Rochdale's defence were able to mark out many of the opposition players allowing Partington time to make a save and kick it out of her D. Later a sideline ball taken by Leech found its way up to Parton on the far side of the pitch. Parton rushed to meet it and turned to take it into the D, when an opposition player got in her way she pivoted and tried to pass to Burrell but another opposition player was able to intercept it. Before they were able to utilise the advantage, Hodcroft was able to retrieve it and in her attempt to get a goal Rochdale were awarded a short corner.

A good effort saw Leech take a strike at the goal that the keeper saved, but before any of the Rochdale players could claim the rebound, Manchester cleared it. A series of short corners in Manchester's favour were defended well, with Collinson and Owen blocking out the receivers at the top of the D, with Brammer and Palmer covering the posts, leaving Partington free to make some excellent saves, including one brilliant kick clearance. However, eventually their luck ran out and Manchester were able to get a goal.

A short time later Manchester were able to make a successful run on Rochdale's D again and despite Rochdale's best efforts, secure a second goal.

A free hit from Owen broke through to Hodcroft, who weaved her way around the midfield before passing the ball off to Parton who in turn handed it off to Yates who was running down the wing. Yates crossed the ball into the D for Burrell, but she wasn't able to get a clear shot on the goal and the keeper saved it. A short corner just before halftime provided Rochdale the opportunity to overload Manchester's defence, but their opposition was too well organised and they were able to knock the ball out of play, ending the half 2-0 up.

The second half saw Manchester continuing to make good use of their high squad count to utilise rolling substitutions, but Rochdale refused to give up, and were able to hold the ball in the centre ground for a time where McDonald, Hodcroft and Yates did some excellent triangle work to keep possession and control the play. Though, eventually, Manchester intercepted the ball for their own attack on goal. Palmer was able to block their run and force them into the path of Brammer and Owen, the latter of whom pelted the ball off to Leech. Leech ran down her wing to evade any opposition player in her way before passing the ball to Hodcroft. Hodcroft cut across into the D to take a shot, deflected away from the net by a Manchester defender, Leech was able to grab it again where she had continued her run. Her strike was saved by the keeper and Burrell was fractionally too late to claim it before it went off the baseline.

With the advantage of more substitutes, Manchester were able to make further gains of two more goals. One coming from a lucky shot and the other a short corner. Another Manchester drive was promptly stopped by Hoyle as left back, who found an angle to Collinson who had pushed up onto the left wing. Collinson received it but was forced off the sideline by the opposition. With the free hit in her favour, she switched the play via McDonald to Hodcroft, briefly intercepted by the opposition before Yates quickly chased them down to retrieve it, then sent it back up the pitch. Unfortunately Manchester had other ideas, and were able to hold them at the top of the D before sending the ball back to their own midfield. They were able to take a shot in Rochdale's D, but Partington saved it and Brammer prevented any rebound by clearing it.

Even with only ten minutes left to go, Rochdale weren't giving up. After a good drive up the pitch and holding it in the opposition's defensive area, they were awarded a short corner. McDonald hit it up to Hodcroft at the top, who passed it off to the side where Collinson had come up to help, who belted it at the goal. Manchester's keeper stopped it but Burrell caught the rebound and sent it back at the goal. A second save was made and this time Hodcroft got it for a attempt on goal. Another save and Collinson made her second attempt and this time it hit the backboard.

Both teams continued to push for additional goals, but neither were able to break past the defence again before the end of the match.

The final score was 4-1, with goal scorer Dionne Collinson (1). Player of the match was Kieran Leech.

Captain Collinson said: "We missed some key players this week but we went out there and gave 100% throughout. They had a constant supply of fresh legs and the advantage of a home crowd. It’ll be interesting to play them again with a full squad and at home.”