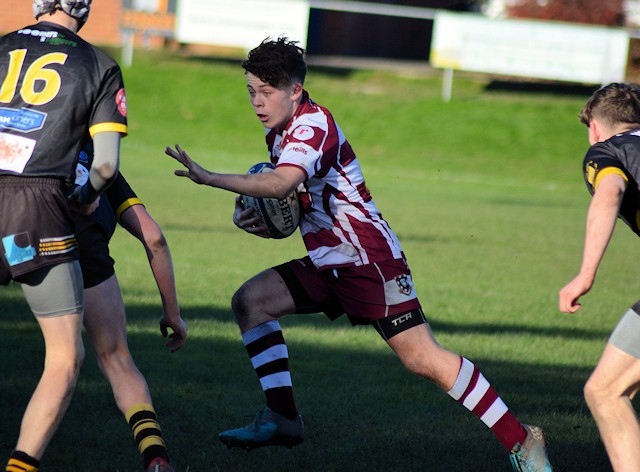 With the preliminary leagues completed, Sunday 21 November saw the first Conference league game for Rochdale Junior Colts. Leigh were the visiting team and these encounters are always close, hard fought affairs. The going was good to firm with the sun shining and a stiff breeze blowing down the pitch.

Rochdale played with the wind at their backs for the first half and they were soon camped in the opposition 22. Matches like these are often decided by small margins and a knock-on close to the Leigh line denied Rochdale a scoring opportunity and allowed Leigh to clear the danger. It was Leigh who mounted the next sustained attack, relying on their big ball carriers to get across the gain line. This pressure eventually told despite some very strong defence and Leigh registered the first score (0-7).

Rochdale were soon back on the attack and were given good field position when Leigh strayed offside. From the ensuing tap penalty, Ben Sunderland used the decoy runners to open a gap before driving for the line and grounding the ball (5-7).

The score restored Rochdale’s confidence and they were quickly back on the attack. Garratt Myers, Olly Mills, Jacob Jackson and Tom Drennan kept Rochdale on the front foot. From a ruck five metres out, Mills was able to power through a couple of tackles and score under the post (12-7).

Rochdale’s scrum was getting on top but the lineout was mis-firing and making it difficult to sustain any pressure. This was compounded when a Leigh front row player had to retire injured and the scrums went uncontested. With no more scores until the interval Rochdale turned around with a narrow five-point lead and the question was would it be enough playing into the wind for the second half.

The second half proved to be a monumental defensive effort for the whole Rochdale team. Gabe Fraser, Ben Kershaw, Ollie Simpson and Max Cooper defending the wide channels with power and poise. Tom Shaw, Will Simmons, Tom Hesketh, Mitch Holt, Nick Wright and Will Rawlinson blocking the midfield. With the backs being shut down Leigh went back to plan 'A' and continued to run into the Rochdale forward pack where Sunderland, Jackson, Alex ‘Basil’ Barry, Joel Rigby, Ben Hankinson, Drennan, Charlie Bleackley and Sonny Joyce gave no quarter. Special mention to Myers and Mills whose dominance at the tackle stemmed wave after wave of the Leigh attack. With the game entering the final quarter Leigh began to kick over the advancing defenders and hope for a favourable bounce. This eventually paid dividends with the Leigh winger scoring right on the touchline. The most difficult conversion was successful and Leigh had their noses in front (12-14).

All the momentum was with Leigh now so Rochdale would have to dig deep to find a way back into the contest. It is a credit to the forward pack that they were able to turn the game in the last ten minutes. They redoubled their efforts and began to get some field position in the opposition half. From a kick to the corner Rochdale ran a lineout move which freed Myers down the blindside and his pace and power were enough to break a tackle and touchdown in the corner (17-14).

Time was now running out and both teams were giving their all in a desperate attempt to finish on top. Another Leigh cross field kick bounced into the Rochdale winger, Kershaw’s, hands and after stepping round the first man he set off on an 80m run to the line. It seemed to take an age to get there but get there he did for the decisive score (22-14).

Rochdale negotiated the final minutes before clearing the ball to touch to end a pulsating game.

This was an outstanding team performance built on a committed and resolute defence rewarded with a hard-earned victory. For a defensive masterclass, capped with a game-turning try, Myers received the Man of the Match award.