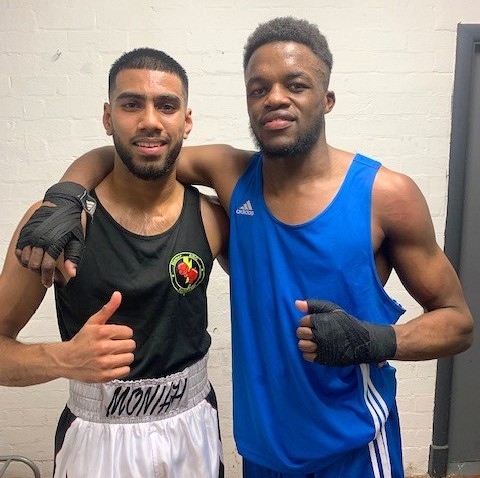 On the sound of the first bell, both boxers came out with their probing jabs in order to find their range to offload their combinations. Then quite suddenly Mahbub and his 24-year-old opponent began to exchange fast and furious punches upon each other, which instantly had the crowd upon their feet. As the bout progressed Yousif began to find his rhythm and his experience showed when he allowed Mahbub to press forward, towards him, so that he could counter-punch his opponent, before tangling up the Hamer boxer’s arms when Mahbub came up close to land punches of his own.

In the second round, Mahbub continued to pursue his opponent, before landing a terrific right hand to the side of Saeed’s jaw. The Salford boxer then began to land his own, very clever counter-punches as Mahbub stepped towards him. As the three-minute round of mayhem progressed, both boxers landed spectacular punches upon each other, whilst Mahbub continued to force the action.

In the third and last round, Mahbub was the first to land a meaningful blow once again, when he landed a clubbing right hand upon the chin of his opponent which instantly snapped his opponent's head back. Saeed began to use the ring once again to step in and out of range as he landed his jab. Mahbub continued to pursue his opponent to get in close to the Salford boxer, who used his vast experience to land clever punches before tangling up and clinching his Rochdale opponent, whilst waiting for the referee to split them apart. This continued throughout the round and in the end, it was experience that told, when the judges awarded Saeed the victory.

Later the same week, 14-year-old Austin Heneghan travelled to Croxteth Sports Centre in Liverpool on Saturday 20 November to take up the challenge of Adam Conlan of Croxteth Boxing Club.

As soon as the bell rang for the first round, both boxers stood toe to toe exchanging fast and relentless punches upon each other, which instantly had the crowd shouting and screaming out. As the round progressed Austin began to force Conlan back upon the ropes so that he could land his over-hand right to his opponent’s jaw. This continued throughout the round, whilst the Croxteth boxer tried to counter-punch his Hamer rival with his own right hand.

The second round was just as relentless as the first, and both boxers set upon each other with fierce, unrestrained intensity, whilst the crowd cheered with delight at the incredible spectacle happening before them. The non-stop action continued in the third and last round when both boxers clashed in the middle of the ring to unload more unrestrained punches upon each other. Conlan began to step back onto the ropes once again as the round progressed and Austin moved in towards him to unload his right hand, whilst the Croxteth boxer tried to reply with counter-punches.

It was an incredible performance by both boxers in which the decision could have gone either way, but in the end, the bout was awarded to the local lad, yet when Austin stepped out of the ring numerous people stepped forward to pat him on the back to congratulate him on such a special performance.