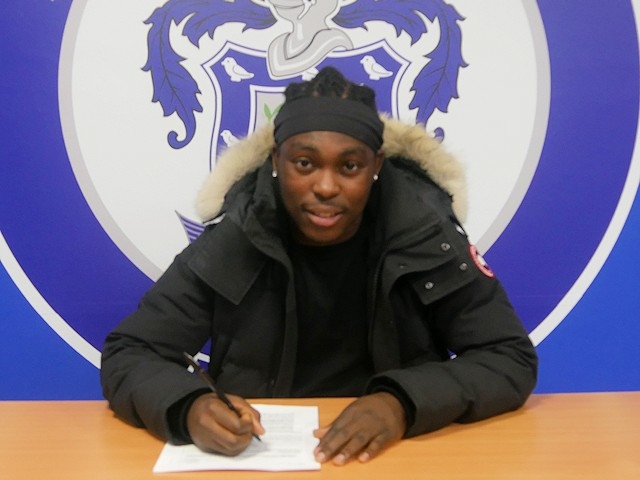 Abraham Odoh has signed a new deal with Rochdale Football Club, extending his stay at the Crown Oil Arena.

The 21-year-old was due to be out of contact at the end of the season but he has now committed his future to the club until the summer of 2023, with an option for an extra year beyond this in the club’s favour.

Odoh joined Dale in February after a successful trial period and he has gone to make 27 appearances for the club, 25 of which have come this season, under new manager Robbie Stockdale.

“I’ve been impressed with his attitude and his willingness to work hard and to get better. There’s a lot of improvement in him, which is exciting, and we’re still working to make him better.

“He’s bought into what we’re trying to do and he has played well enough to get a new deal.

“Ibbi [Abraham] has played significant minutes in the team and he’s playing regular first team football for the first time. He’s enjoying it and the players enjoy playing with him, so he deserves his new deal and hopefully he kicks on from here.

“I’ve always wanted to reward players that are here, as well as bringing new players in, and hopefully Ibbi is going to be the first of a few players that will sign new contacts.”

Before joining Rochdale, Odoh had most recently been at Charlton Athletic, where he spent 18 months, following a move there from Isthmian League South Central Division’s Tooting and Mitcham. After originally joining the Addicks on loan, he went on to sign a permanent deal with the side and made one appearance.

After putting pen to paper, Odoh said: “I’m delighted to have extended my stay at the club by signing a new contract.

“I want to thank the manager for giving me this opportunity and I’m looking forward progressing forward with the team.

“I like the football we play and I like the atmosphere around the club and how we’re all together. I’m enjoying my time here and it’s like home to me.

“I’d also like to mention the fans. They’ve been brilliant during my time at the club and I want to thank them for their support.”