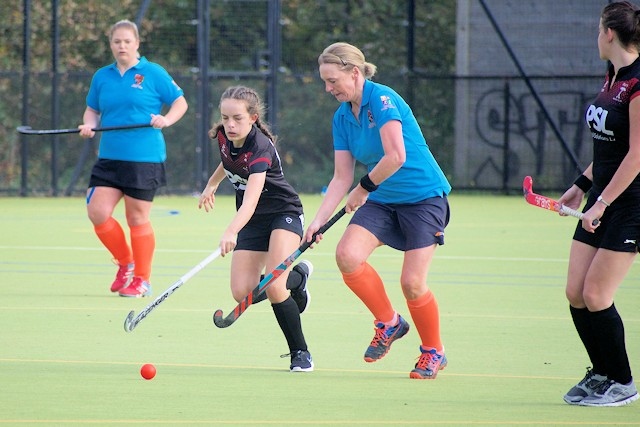 This weekend Rochdale were away playing Wigan, and the weather threw hail, wind and rain at both teams on a cold Saturday.

Despite the conditions, both teams dove right in. Wigan intercepted well but Rochdale were chasing down every ball they lost till they reclaimed it.

Wigan made an early push onto Rochdale's goal, but Collinson channelled their run out to force them into the path of Owen who swiped the ball and hit it up the pitch to Hodcroft. Hodcroft weaved around the opposition to hit it to the wing for Pickering to run onto. Pickering drove the ball down towards Wigan's baseline, but with three players marking her out when she got there, her options were limited. She tried to pass to Burrell but a defender blocked the ball and started running. Hodcroft tackled to get it back, but her cross into the D was deflected away from any Rochdale player by a defender before it went out of play.

An attempt on goal by Wigan was thwarted by the umpire blowing for a foul just before the strike went in. Owen took the free hit and found Yates on the left wing, who hurtled up the pitch before passing the ball square to Hodcroft - who had been shadowing her - when a defender blocked her path. With an opposition player incoming to tackle, Hodcroft quickly tapped it forward to Parton, who crossed it to Burrell. Burrell ran into the D, but her attempt on goal was dealt with by Wigan's defence.

Another Rochdale attack resulted in a short corner in Rochdale's favour. It was injected by McDonald up to Pickering, who handed it off to Hodcroft who quickly struck it towards the goal where McDonald had run to the post to deflect it in around the keeper for the first goal of the match.

Rochdale's goal seemed to spur Wigan into a series of offensive manoeuvres. Taking advantage of their substitute they pushed hard each time they won the ball into Rochdale's defence.

Rochdale rallied well, with the midfield coming back to support the defence. In one instance Knowles channelled a player out down the left wing, enabling her to tackle the ball and hand it off to Yates. Another saw Collinson swoop in to relieve an opponent of the ball before making her own run as Rochdale arranged to cover her as she did.

Wigan were able to get a few shots on goal, most of which were brilliantly saved by Hoyle - including some excellent glove and shoulder work, and one attempt was disallowed because the ball went over the baseline and the players didn't hear the whistle.

Eventually Wigan's relentlessness paid off as one of their players received the ball on their reverse and lifted it up and over keeper Hoyle before she could get a glove to stop it. Rather than perturbing Rochdale it seemed to galvanise them, as they focused on working their way around the pack of opposition players that seemed to crowd the player with the ball on every attack they made. McDonald, Hodcroft and Pickering went back to their tried and tested triangles to bounce the ball between them and used the space to work around the opposition and finally into Wigan's defensive area.

A long corner from McDonald went wide to Pickering who crossed it just out of reach of Parton on the far post. Yates scrambled to try and reclaim it but Wigan were faster, though she forced them into a too early pass to escape her. A sideline free hit from Knowles found Yates, who drove the ball up the left wing to cross it to Hodcroft. Hodcroft twisted between the opposition to get into the D, her attempt on goal was unsuccessful, but Rochdale's efforts to reclaim the ball earnt them a short corner. McDonald injected up to Burrell at the top of the D, who took a strike as soon as she'd driven it over the line and found the back of the goal.

As the weather and fatigue began to take their toll, Wigan managed to secure themselves another short corner. They took a strike from the top of the D, Palmer got her stick to it, but it wasn't enough to stop the goal, and Wigan had equalised.

On another Wigan push they managed to get inside Rochdale's D. A hard strike hit Collinson in the foot, causing her to drop her stick and hop away in pain. As all players stopped, thinking play was paused until the player was checked on before going into a short corner, a Wigan player took advantage of both team's concern and collected the ball to push towards the goal. Palmer attempted to block the strike, but was unable to and due to the distraction Hoyle was unable to react in time to save it. The goal was allowed to stand, because the umpire hadn't actually blown.

After that frustration seeped in, but despite it Rochdale kept pushing and hassling for every ball until the whistle finally went for full time.

Final score was 3-2, with goal scorers Katie Burrell (1) and Paula McDonald (1) Player of the match was Claire Hoyle.

Captain Becky Knowles said: "Wigan are top of the league but we certainly didn’t make it easy for them!”