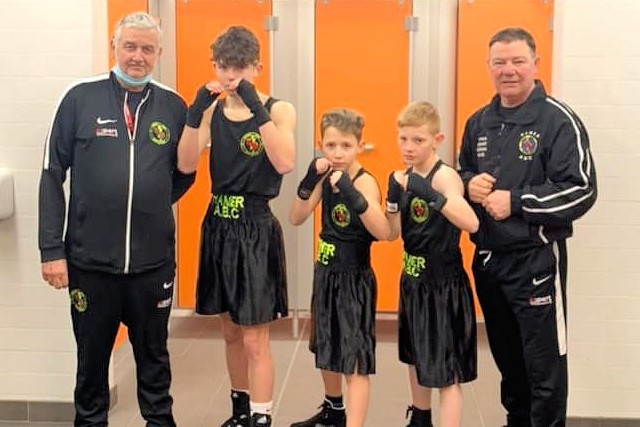 Three Hamer boxers participated in an open class skills bout at the Fuse Sports Hall in Partington on 1 December.

The first boxer to step into the ring was 12-year-old Connor ‘The removal man’ Middleton – participating in his second-ever skills bout – when he met Drew Grimshaw of West Wythenshawe Boxing Club.

On the sound of the first bell, Connor stepped out of the red corner to meet his much taller opponent and straight away set the pace of the bout by storming forward with continuous punches throughout the round.

This continued in round two, with both boxers entertaining the crowd with exciting action. In the third and last round, the pace slowed down and Grimshaw used his distance to connect with his long-armed punches as Connor stepped forward to unload punches of his own.

In the end, both boxers had their arms raised as the crowd showed their appreciation.

Next on for Hamer was 11-year-old John Loveridge, who was stepping into the ring for the very first time when he met 12-year-old Briley Hargreaves, of Timperley ABC.

The bell rang for the first round and the Hamer youngster came out to press forward with clever head movement to unload his punches, which continually forced his opponent onto the ropes.

Both boxers showed good skills throughout the entire round, which entertained the supporters of each boxer.

On the sound of the second bell, John began to up the pace, unloading numerous combination punches upon Briley, who also connected with his right hand as the Hamer boxer moved towards him.

In the third and last round, it was the Timperley boxer who came forward throwing numerous punches, whilst Loveridge stayed upon his back foot, waiting to connect with counterpunches.

In the end, both boxers received a great round of applause as they stood in the middle of the ring with their arms raised.

The last Hamer boxer to climb into the ring that night was 13-year-old Alfie McKay, who was also participating in his first bout for Hamer, when he met 14-year-old Leland Skinkis, of West Wythenshawe Boxing Club.

Throughout the first round, young Alfie stayed composed as he threw out his jab, before stepping back onto his back foot to entice his opponent to step forward so that he could land his power-punch.

Alfie stayed composed as he used his jab to control the bout whilst using good footwork to move around the ring. In round two, the Hamer youngster stepped forward, more upon his front foot to land his swift jab, and when Skinkis stepped towards him, McKay was quick to use the ring as he unloaded fast jabs.

Before the start of round three, Alfie was told by his coach Steven Connellan to ‘press forward and use his right hand more’ when he forced his opponent onto the ropes.

The bell rang for the last round and straight away McKay began to unload his right hand to the chin of his opponent, who continued to step forward to connect with punches of his own.

As the round progressed, McKay gained momentum as he landed his solid right-hand to the face – to the delight of his supporters – who cheered loudly when both boxers had their arms raised at the end of the bout.

The action didn’t stop there, because Hamer Boxing Club were on the road again on 3 December when 18-year-old Aeron 'The Viking' Maddocks travelled to the Gorilla Warfare Centre in Walkden, Manchester to meet George Killeen, of Collyhurst and Moston,in a terrific and very closely fought boxing bout that had the crowd upon its feet throughout the entire fight.

The victory went to the local lad via a split-decision after three highly entertaining rounds.