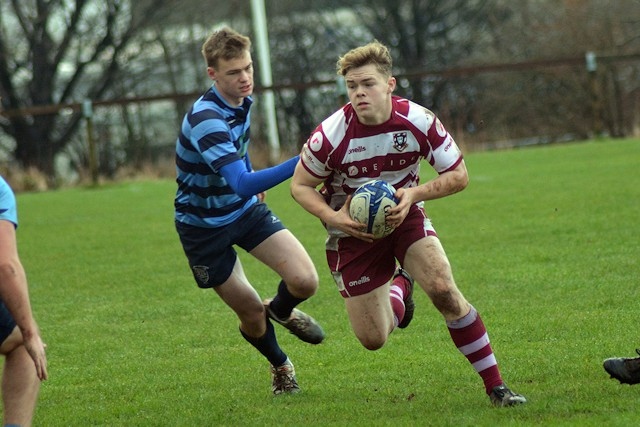 Tom Shaw's decision-making and execution at fullback was excellent

Round 2 of the Junior Colts Conference League saw Rochdale entertain Liverpool Collegiate at Moorgate Avenue on Sunday 12 December. The conditions were firm underfoot with a strong wind diagonally across the pitch. The visitors played with the wind in the first half, kicking for territory and only going wide when in good field position. Rochdale's defence was watertight and more than capable of repelling Collegiate's big runners.

The majority of the first half took place in the middle third of the pitch, with both teams having only the odd foray past the opposition's 22 yard line, where good defence and some unforced errors allowed the defences to clear their lines.

It appeared the first half would end scoreless but with one final effort, Rochdale applied pressure on the Collegiate goal line. Despite losing position the clearance kick was rushed and allowed Ben Kershaw, the Rochdale left wing, to gather and step inside his man. He cut inside another defender before feeding Will Simmons, who wrong-footed the opposition and crossed for the score (5-0) just before half time.

Rochdale were more than happy to have the lead and the wind on their backs for the second half. The first ten minutes of the second half followed the same pattern as the first with neither team dominating. From a line-out Charlie Bleackley stole the ball, Will Rawlinson tidied up and Garrett Myers took the inside pass. Myers brushed off a couple of would-be tacklers before running clear, swerving past the fullback and making the line for a fine individual try which was successfully converted (12-0).

Rochdale were unfortunately caught napping at the restart when, despite gathering the kick-off, a poor fly hack gave position to the advancing players and allowed the Collegiate scrum half to kick ahead and regather for the score (12-5).

This spurred Rochdale on and they were soon back on the attack. After a cross-field kick was claimed by Collegiate, the Rochdale fullback, Tom Shaw, won back possession before breaking blind and feeding Tom Drennan. The pass was perfectly timed to put the man on the outside of the wing and Drennan made the corner for another try (17-5).

Rochdale were now dominating both possession and territory and, after more sustained pressure, Myers was on hand to crash over for his second score of the match (24-5).

Rochdale again conceded possession at the restart, allowing the Collegiate scrum half to put in a pinpoint-accurate kick down the touch line before regathering and setting up the ruck. The ball was quickly moved across field and the Collegiate centre crossed under the post (24-12).

With time running out Rochdale were back in the Collegiate 22. After Ben Sunderland turned the ball over, Kershaw made another break feeding Mitch Holt who stepped inside the desperate defensive cover to cross the line for the final score (29-12).

Lots of excellent performances including Ben Hankinson who demonstrated some fine rucking and carrying, Shaw's decision-making and execution at fullback, Joel Rigby hitting lots of rucks and Drennan's impressive work rate. MOTM went to Alex Barry for tackling, carrying and an energetic performance around the pitch.

Rochdale finish the year unbeaten in the league, looking forward to the second half of the season and continuing their run in the Lancashire Cup.