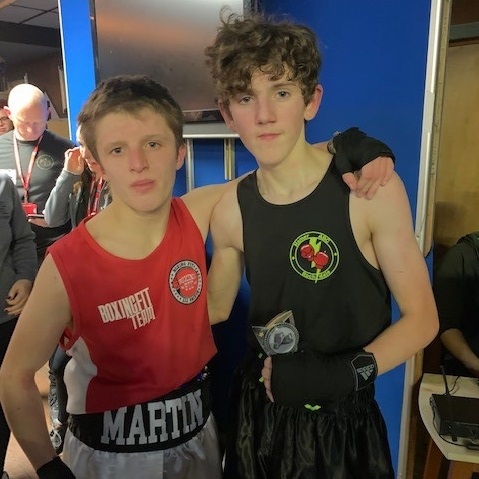 Daunting chants of “Nathan, Nathan” accompanied the Hamer youngster when he stepped under the bright lights of the ring to meet his opponent. But on the sound of the opening bell, Kieren McMenamy tried to silence the crowd when he stormed out to land a solid right-hand punch to the chin of his opponent.

Martin was hurt and the Hamer youngster instantly forced him into the blue corner, where he unloaded more punishing punches upon his opponent.

As soon as the bout had settled down. Kieren began to use his height advantage to stay out of range and when Martin attacked him, he took a small step back, before unloading his straight right hand to the chin of his on-coming opponent.

The Cheshire boxer continuously attacked his Hamer opponent, which constantly left him open to counter-punches from Kieren and when Martin did hesitate, the Hamer boxer stepped forward with his double jab, followed by his compacted right hand to the head.

With about twenty seconds to go in the round, the Rochdale boxer landed another hurtful right-handed punch, which suddenly forced Martin to back off, giving Kieren the impetuous to continue his attack. He forced his opponent around the ring before he trapped him in the neutral corner, where he continued to unload punch after punch upon his opponent, prompting the referee to step in and administer Martin a standing eight count.

Then, just as the referee allowed both boxers to continue, the bell rang to end the round.

As soon as the Hamer youngster sat down in his corner, he received high praise from his cornerman Steven Connellan, who told him to stay focussed and continue with their pre-match plan, because he believed it was working.

The bell rang for round two and the crowd raised their voice yet again, when their local boxer attacked his Hamer opponent, only to be met by another firm right-hand punch to the chin.

Kieren could see that his opponent was hurt, so he continued to land his right hand as Martin tried to land punches of his own.

The Cheshire boxer showed great determination as he continued to press forward with his punches, but by now the Rochdale boxer was in his comfort zone and it showed when he sustained the use of his brutal right hand to the chin of his on-coming opponent.

As the round progressed, the Cheshire boxer began to show signs of despondence and he began to back away from the Hamer boxer’s right hand. This gave Kieren the impetuous to step forward to unload more punches.

The crowd could see that Nathan was struggling so they raised their voices to spur him on and the Cheshire boxer dug deep to fight back. By this time Kieren was in his zone and he met his opponent head-on to unload yet another onslaught of punishing punches, which immediately forced the referee to step in and end the fight in favour the Hamer boxer.

After the bout, Hamer coach Steven Connellan said: “That was an outstanding performance to end the year by Kieren.

“We worked on a plan, and he executed it to perfection.”