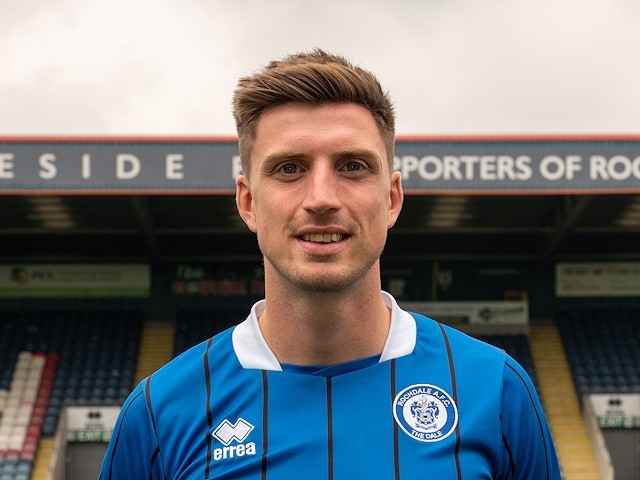 Rochdale striker Jake Beesley has been named the Sky Bet League Two Player of the Month for December.

Four goals and an assist in three games for the 25-year-old who has become the fulcrum of the Rochdale attack. He managed a variety of finishes, too, including a cheeky backheeled flick at Bristol Rovers and a calmly stroked clip against Newport.

Rochdale manager Robbie Stockdale said: “I’m really pleased for Jake. I’m sure he will say it’s a collective effort and that it’s the team that has helped him win the award.

“But it’s really nice when one of your players earns an individual award because it means he’s playing well and scoring goals.

“What Jake offers us is really important for the team, but ultimately he’s in the team to score goals. Thankfully now he’s hit good form and he’s taking a lot of those chances. Long may that continue.”

Beesley said: “It’s great to win it. I have to thank my teammates for all their help in the games.

“It was a bit of a shock because you don’t really think about individual awards, especially mid-season, but it’s always nice to win things.

“It shows that you’re doing well and doing a good job for the team, so it was nice to hear that I’ve won it.

“I felt confident going into games and it’s always nice to score. I feel like I’m always working hard for the team and even when I don’t score, I feel like I’m bringing other things to the game.

“As a striker, you are judged on your goals, so it’s nice to start putting them away regularly.”

“With fixtures building up thanks to unplayed games from the Christmas period, Rochdale will be hoping Beesley can pick up where he left off and continue to fire them up the table in 2022.”

Sky Bet EFL trader Ivor Davies said: “The Rochdale striker’s four goals in three games wasn’t a bad return for a side in the bottom half of League Two.

“Those four goals took his tally to nine for the season and whilst it’s unlikely at 20/1 he’ll finish the season as the League Two top scorer, his goals will be vital in helping keep Rochdale in the division and get them pushing towards the top half of the table.

“Dale is priced at even money to finish in the top half, which would represent a good season for Beesley and co.”