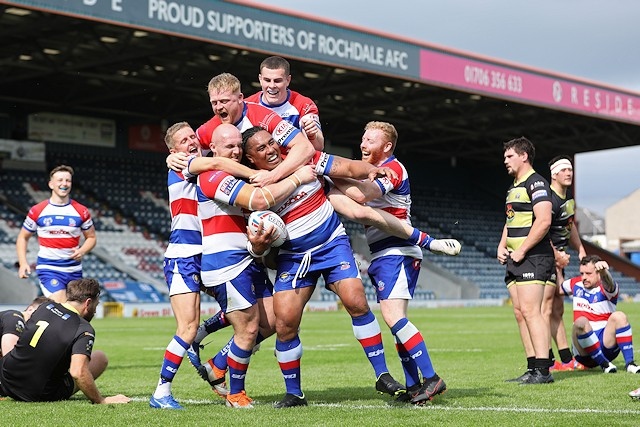 Fuifui Moimoi has re-signed with Hornets for the 2022 season

Rochdale Hornets fans are counting down the days until the new season starts.

Matt Calland’s side kick off the new league campaign with a home game against North Wales Crusaders on Sunday 27 March.

Prior to that they face the Midlands Hurricanes in the second round of the Challenge Cup at the Crown Oil Arena on Sunday 30 January.

After a seventh-place finish in the 2021 season, Hornets have added 12 new signings to their squad, including youngsters Ben Metcalfe, Scott Parnaby and Fin Stewart.

A number of players from the 2021 season have re-signed for 2022, including 41-year-old prop Fuifui Moimoi, who has represented New Zealand and Tonga with over 200 NRL games.

Chairman Andy Mazey spoke about his delight in adding Thornton to the staff in December.

He said: “Gary’s enthusiasm to return to the game and be a part of this exciting project at Rochdale Hornets was apparent throughout talks with both Matt and myself.

“As a former Championship and League One Head Coach of the Year, Gary brings a wealth of coaching experience but more importantly will have Matt's back as they work closely to improve all aspects of performance.”

13 players from the 2021 squad have also moved on from Hornets, with Rob Fairclough, Shaun Ainscough and longest-serving player Ben Moores amongst the most notable departures.

Premier Kia will be the new principal sponsor on a two-year deal having been a partner at the club for more than six years.

Season tickets for the 2022 season are now on sale for just £135 for adults, £110 for concessions, £20 for students and free for juniors: www.hornetsrugbyleague.co.uk/tickets.

Fans can also pick up 2022 home and away kits online at www.hornetsstore.co.uk.