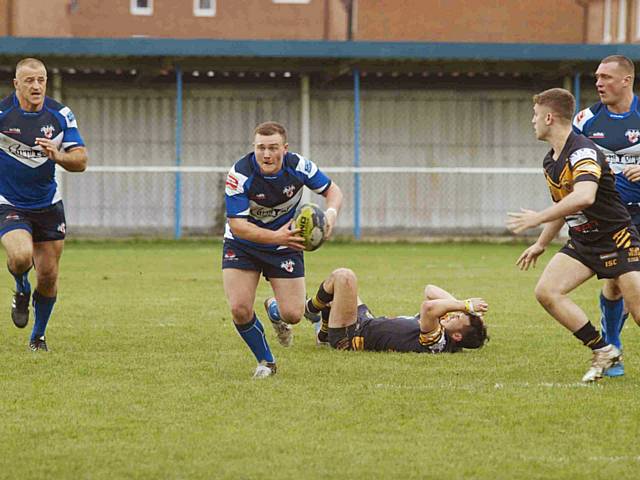 Callum Ogden has returned to Rochdale Mayfield for 2022

Rochdale Mayfield return to rugby action this weekend (15 January) as they take on Wigan St Patricks in the first round of the Challenge Cup.

The two sides have enjoyed some epic battles over the years and Saturday’s 2.15pm kick-off promises to be another superb tie, with the visitors appointing former Wigan and Great Britain legend Andy Gregory as their new head coach.

Mayfield continues under the leadership of coaching duo Sam Butterworth and Steve Wood after they reached the play-off stages of the National Conference League last season, being knocked out by Hunslet Club Parkside.

Club chairman Neil Ramsden has faith in his team to deliver, despite the influence of the experienced Gregory in the opposition dugout.

He said: “Andy Gregory has a great pedigree in this competition at the highest of levels, but this afternoon he is at the grassroots of the game.

“It’s a bit different down here and this is what we are used to.

“We will pay the coach and his team the utmost respect but Sam and Steve have pulled together a good bunch of lads here at Mayfield and we will be looking at sending Andy and his side back down to Wigan with their tails between their legs.”

Butterworth and Wood have added two new signings to their squad in Reece Hamlett and Callum Ogden, and they join long-serving players such as Si Moore, Liam Whalley and Mark Biggins in the Mayfield squad.

Head coach Butterworth is upbeat about his side’s chances ahead of Saturday's game.

He said: “We are taking nothing for granted in this game.

“After last season it's like we are all starting again from scratch and we know little or nothing about where Pats are up to with their preparations for the season.

“What I do know is that after a slow start to our training we have really picked up the pace and the intensity of our sessions.

“I am very happy with the way things are going and I really believe we are good to go.

“I am excited to see our new signing Reece Hamlett in action on Saturday. Reece is a big strong centre with a boatload of experience already.

"After playing here with our youth section he spent time at Wigan, Warrington, Bradford and Swinton, but now he's back here at Mayfield and is about to set the game alight.”

Murphy's NW Specialist Transport MOT and Repair Centre in Rochdale will sponsor Saturday’s game but the club is looking for individuals or businesses to get involved.