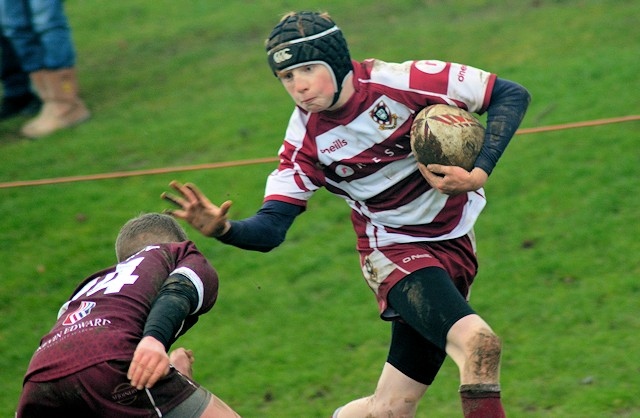 Gabe Fraser's hand off before his try

With no league match on Sunday 9 January, Rochdale travelled over the Pennines to take on Morley in a friendly fixture. Having played earlier in the season and narrowly losing by a couple of points, Rochdale saw this as an ideal warm up for next week’s Lancashire cup semi-final.

Rochdale were keen to start strongly, especially after not playing for over a month, and this they did, dominating the early exchanges. Credit must go to Morley who defended valiantly, repelling all that Rochdale could throw at them close quarters. Rochdale needed to move the ball into the wide channels and stretch the home defence.

The opportunity soon presented itself when the forwards won a ball against the head from a scrum on the home side’s 22. Zac Baker made the break down the blind-side, drawing the winger in before delivering the scoring pass to Gabe Fraser on the Rochdale left wing (0-5).

Morley’s strong forwards were keeping them in the game and providing plenty of ball for their backs but Rochdale kept them at bay and added a further score after some more pressure. A strong carry from Joel Rigby got Rochdale over the halfway line. After the ball was quickly recycled, fast hands got the ball to right wing, Ben Kershaw, on the outside of his opposite number. Kershaw cut-back inside, wrong footing the defence, before throwing a perfect pass back inside to Ben Sunderland who took the ball in full stride and outpaced the defence to score under the post (0-12).

It's difficult to keep a good side out of the game for the whole match, so it was no surprise when Morley scored before half time after some sustained pressure allowed them to get the ball to their left wing who crossed for a converted try (7-12).

Morley carried the momentum into the second half and had Rochdale pinned back for long periods. They eventually scored from close quarters to level the match (12-12).

Rochdale had the wind behind them for the second half but failed to use the conditions to clear their lines, preferring short kicks in an attempt to regain possession as opposed to the long kick for territory. This kept returning possession to the home team and helped Morley to sustain the pressure. Rochdale were undone by a grubber kick that stuck in the mud allowing the Morley centre to win the race and kick on to ground under the post (19-12).

Rochdale went straight on the attack from the restart. The kick off was caught by James O'Connell who crossed the Morley 22m and, after several more strong carries, Ben Hankinson caught a ball round his bootlaces and powered through a gap and over the line (19-17).

There was still a quarter of the match to go but neither team could deliver the knockout blow and, with no further score, Morley won by the narrowest of margins.

It was a hard-fought contest with skill and power to the fore culminating in an excellent match. Special mentions to the Rochdale backs whose line speed and defence were excellent all game; Garrett Myers who once again put in a shift carrying and tackling and MoTM Jacob Jackson for another high energy performance