You are Here: Home » News » Sport News » Boxing: Another victory for Aeron 'The Viking' Maddocks

Boxing: Another victory for Aeron 'The Viking' Maddocks 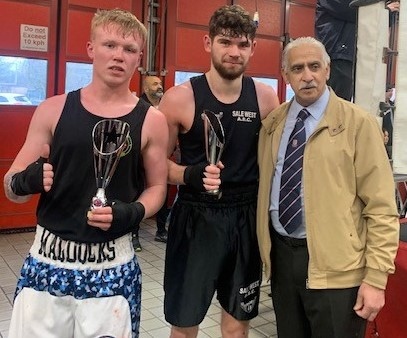 The start of another busy weekend for Hamer Amateur Boxing Club saw Aeron ‘The Viking’ Maddocks storm into Moss Side Fire Station, Manchester on Saturday 22 January to compete in a brutal battle against Daniel Brown, of Sale West Boxing Club.

The bell rang for the start of the first round and both boxers immediately locked horns to let loose a barrage of punches upon each other which instantly had the crowd upon their feet.

The crowd waited in anticipation to see if the bout would continue and when the Sale West corner and the ringside doctor performed a marvellous task of stemming the flow of blood, both boxers were told to continue.

At first Brown kept the action at arm’s length, but it wasn’t long before both boxers unloaded heavy punishment upon each other again, the crowd screaming out with delight.

As the round progressed, Aeron forced his opponent towards the blue corner where he unloaded a savage bombardment of punches to both the body and head.

When the bell sounded to end the round, the Sale West boxer landed a two-punch combination to the head prompting the referee to give Aeron a standing eight count.

The second round started off slowly as both boxers used probing jabs to find their range. Then the bout suddenly exploded once again when Brown landed a savage right-hand to the chin of the Hamer boxer, forcing him into action. To the delight of the crowd, both boxers stood toe-to-toe in the middle of the ring, exchanging savage blows upon each other.

Just before the bell sounded to end the round, Aeron landed a hammer blow from his right hand to the chin of Brown, who staggered back onto the ropes and Aeron instantly stepped in to unload more punches to both the body and head.

Both boxers continued to land gruelling punches upon each other at the start of the third and last round.

As the round continued, Brown began to tire a little, which gave Aeron the impetus to thrust forward with non-stop punches, which gained him victory by a unanimous decision.

Hamer coach Steven Connellan said: “That was an incredible and highly entertaining boxing bout by both boxers, which would have equalled any professional performance had it been televised.”