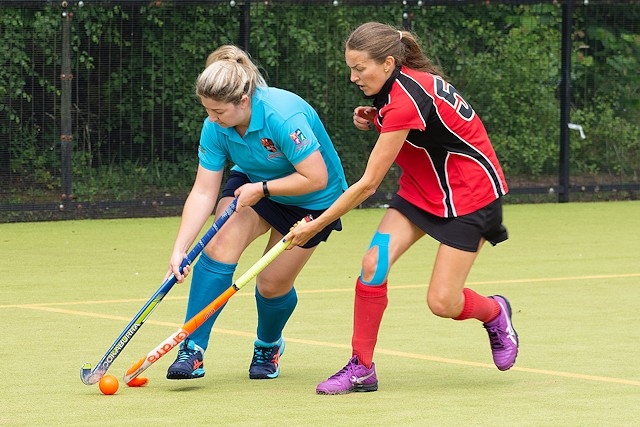 Becky Knowles (left) was named player of the match

This weekend (Saturday 12 March) Rochdale were hosting City of Manchester 2nds, and hoping for it to remain dry as they pushed to make progress after their well deserved win the previous week.

It quickly became clear that Manchester were very good at intercepting the ball and crowding out any space for Rochdale passes or free hits. This kept the pressure on Rochdale's defence, and despite some excellent saves from Partington, clearances from Owen and marking by Mongan, Manchester were constantly making another push. Eventually this persistence led to Manchester taking the lead with a couple of goals.

Rochdale were able to adapt, and started opening up space for their free hits by moving before the shot was taken, with a switch between McDonald and Pickering almost working perfectly for one, and Knowles running into open space on multiple free hits and creating some great opportunities to pass or drive the play up the pitch.

Hodcroft was able to intercept a Manchester pass in the midfield, and despite the opposition being determined to crowd her out, she evaded them all on a sideways run towards the top right of the pitch before firing it into the D. Collinson was able to collect it and raised it over the keeper's kicker with a small reverse lift to sneak it down the inside of the right post to secure a goal for Rochdale.

Being four one down at half time, Rochdale decided to restructure. Palmer was subbed off to bring Knowles into defence, and allow Banks to spend more time up front. It turned out to be a good strategy as it rebalanced the play to get them into Manchester's defence more often and that was the only way they were going to get more goals.

After blocking a Manchester player, McDonald passed to Collinson who swiftly knocked it to Banks. Banks hurtled down the wing and wasn't going to let a couple of opposition players get in her way, before handing it off with a strong hit into the D. Collinson was running in and smacked it towards the goal. The keeper saved it but Rochdale had pushed up and dug in to try and win it back. They were awarded a short corner. They took their shot early, but yet again the keeper blocked it, and Rochdale's effort off the rebound was intercepted by Manchester and sent out of their D.

Rochdale's defence were equally busy, pushing up to aid the midfield and strikers, yet also needing to fall back to defend when Manchester broke through. They were left particularly vulnerable on one such incident where three Manchester players ran into the D with the ball and only Mongan and Partington in their way. Mongan channelled the ball carrier out, giving Rochdale time to track back, and forcing Manchester to take the shot under pressure and Partington blocked it before kicking the ball out of her D.

Manchester felt briefly emboldened after yet another goal, but with Mongan and Knowles channelling a lot of their attacks out only to drive the ball back down the wing far enough to give them a clear shot to a midfielder, Manchester's efforts were in vain. A concerted effort from Rochdale's midfield got them back into Manchester's D. Banks took a shot only for the keeper to save it. Pickering was able to grab the rebound and was able to lift it just high enough to sail into the goal over any opposition player's sticks. Another goal for Rochdale and the narrowing of Manchester's lead.

By now Rochdale were well and truly in their groove, with the whole team putting in a great effort to shut down their opposition and get up and down the pitch to create goal opportunities and defend. It was this determination that allowed Knowles a clear shot to Banks in the centre after winning the ball from a tackle. Banks ran down the centre of the pitch, weaving around the opposition before entering the D with only the keeper in her way. The keeper came forward off her line to try and close Banks down, but Banks hit before she could and the ball slammed into the goal down the left post.

Rochdale were determined to close down the goal difference, and they were rewarded with a few more short corners, but unfortunately they weren't able to convert any more of their opportunities into goals.

Captain Knowles said: "Wow, another brill game and 3 more goals. Not a win but amazing play.”

Player of the match was Becky Knowles.