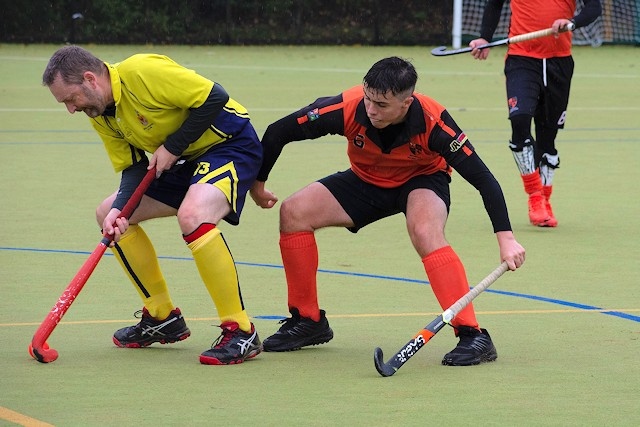 Steve Hirst was named man of the match

This Saturday (19 March) saw Rochdale travel to Stockport to take on Bramhall away as the season draws to a close in the next two weeks. It looked like it would be a difficult fixture going into the match with Stockport sitting third in the league, but Rochdale were hoping to cause an upset having a lot more to play for than the home side. The weather was also unusually favourable, being a nice warm, sunny day as spring starts to come in.

The match started in earnest, with the boys in orange playing a 4-4-2 due to having more defenders and less midfielders this week, but they did have one substitute. Rochdale did start the game much brighter, camping in the opposition half for much of the opening ten minutes. Several good chances were created but the home side managed to block them and looked threatening on the counter.

This would be where Stockport’s opening goal would come from, as a Rochdale penalty corner broke down Bramhall attacked at pace, catching Rochdale’s defence high. The home team's forward proved to be a good dribbler and he managed to get around the Rochdale centre back and slot it in the bottom corner to open the scoring for Stockport Bramhall, albeit against the run of play.

It gave the home team a bit of a shot in the arm and they started managing to press higher, to put Rochdale under some pressure. The team in orange soaked it up well and it was not long before they were on the front foot again. One of the home side's players did start to get a little rowdy though as he was having to do more defending than he would have liked. A clinch point came when Andy Meanock went past him like he wasn’t there and the Bramhall midfielder took a swipe at Meanock after the ball had gone past him. Fortunately, the home umpire made the strong decision and gave him a yellow card, which had the desired effect as no further cards were required in this game.

With both sides calming down Rochdale got back to playing a lot of good hockey, constantly getting inside Bramhall’s 23 metre line and D but the away team were unable to score, with the final passes just getting picked off. Unfortunately, a second goal would be added from another Bramhall counter, as they made an interception. Catching Rochdale high up the pitch a good piece of individual skill again from Stockport’s forward got through on goal to slot the ball into the net to double the home side's advantage. It was harsh on Rochdale who were largely controlling the possession, but they would come in two goals down at half time.

The team talk was largely positive as Rochdale had largely been the better side, just lacking a clinical finish or two. If the away team had had the better of the first half, they dominated the second. Possession stats show that it was almost all Rochdale, but when Bramhall did get the ball they swiftly broke through into Rochdale’s D or at least the 23 metre line. The next goal was going to prove crucial in this game.

A powerful attack by Rochdale down the right was well worked into the D at speed and with precision. Two passes to the left saw an opportunity for Josh Robinson to slide in and sweep the ball into the backboard past the planted goalkeeper. The score was now 2-1 and Rochdale  looked like adding a second.

The away side kept attacking and creating chances, but were unable to find a second as time started to wear on. With the game almost up Rochdale won a penalty corner and flashed a shot agonisingly wide of the post. Noticing almost every player had come up for the penalty, Stockport broke quickly from the 16 hit out. Driving straight at the back line, they again worked it in with skill to add a third goal with 20 seconds remaining. It was heart-breaking for a Rochdale side who had given everything and come so close to getting a much-needed point but it was not to be.

Rochdale only have two games to play before the end of the season and relegation looks likely as they are currently at the bottom of the table. Hopefully going down a division will give the team a chance to regroup and come back stronger after the league reshuffle by England Hockey last year.

Man of the match was Steve Hirst.