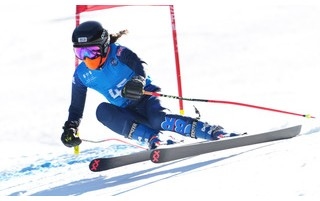 The teenager competed in all four disciplines – Downhill, Super G, Giant Slalom and Slalom – throughout the Junior and National championships, which run from 27 March until 3 April.

She said: “I am very pleased with these results as I haven’t had many chances to train Super G this season and this was also my first time ever doing downhill.

“The National Championships Giant Slalom went quite well. The course was rutted and challenging due to weather. The second run was really good and I managed to move up to fifth internationally and second British, which I'm very pleased with as I came third on the run behind a French and a Swiss girl.

“Thank you to my sponsors Fortvale, HRigg Properties and the Winter Sports Foundation for helping to support the trip.”

Despite having four pairs of skis stolen, Daisi took to the slopes with backup sets during the National Junior Championships Slalom.

She added: “I had to miss inspection of the slalom to go and prepare a backup set from a few seasons ago. Sadly I crashed, but I spent the rest of the afternoon being detective and appealing for information on the whereabouts of my skis.

“I did wake up to the pleasant surprise of my skis being returned. I then competed in the Giant Slalom on the returned unprepared skis but crashed again. I have learned a lot and will work through the challenges to be back next year!”

Despite a “disappointing” performance, Daisi says she still had “a fantastic experience.”

Daisi placed 44th in the Super G and 43rd in the Giant Slalom and did not finish the second run of the Slalom due to her tips crossing.

She said: “Super G was a difficult event for me, as I haven’t had the opportunity to train it much this season.

“I was heading quite well in Alpine Combined – a run of Super G followed by a run of Slalom – until unfortunately I fell inside.

“I had a decent first run in Slalom and good skiing down the steep but resulted in a DNF.

“I felt I learned a lot from the Giant Slalom. I was particularly looking forward to this event and ended up with a 43rd position which was disappointing.

“I know I didn't ski my best but was happy to walk away with the lessons learned, knowledge and a fantastic experience.”