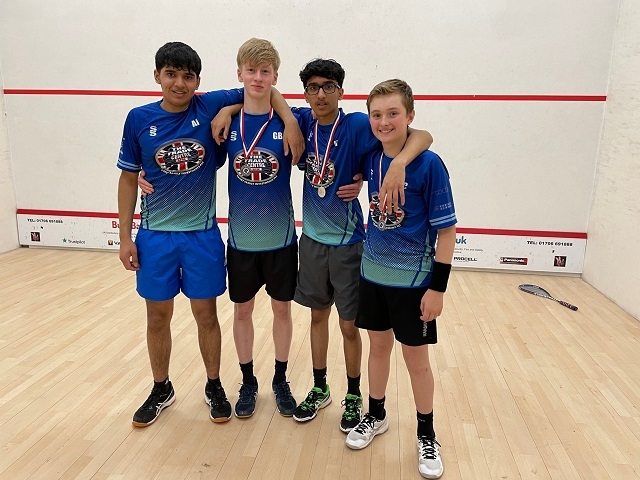 Rochdale Squash Academy junior first team made the final of the North West Counties Squash League 2022 in their second full year of competition against the top junior teams in the North West.

The team of Abdullah Iqbal, George Bailey, Harith Iqbal and Adam Curran ended up drawing the final against  opponents Bollington Squash Club which was held at Rochdale Sports Club on Sunday 3 April.

Two players from each team won their individual matches so the winner was decided by the number of points won – which meant Rochdale finished as runners-up.

Eddie said: “We formed the academy at Rochdale Sports Club to introduce more juniors to the fun of playing squash and have around 30 juniors from the age of seven to 18 attending our coaching sessions on Sunday afternoons.

“We started with three playing junior members at the club in 2016, and our aim was to introduce juniors to squash and help to develop responsible young adults by working in groups, helping coach each other, with some using it as part of their Duke of Edinburgh Award.

“We have helped to develop some good squash players with a number now playing for Lancashire and attending county squash training sessions.”

Sessions take place at Rochdale Sports Club on Sundays at 4pm for a cost of £3 per session: this includes the use of rackets, goggles, balls and coaches.