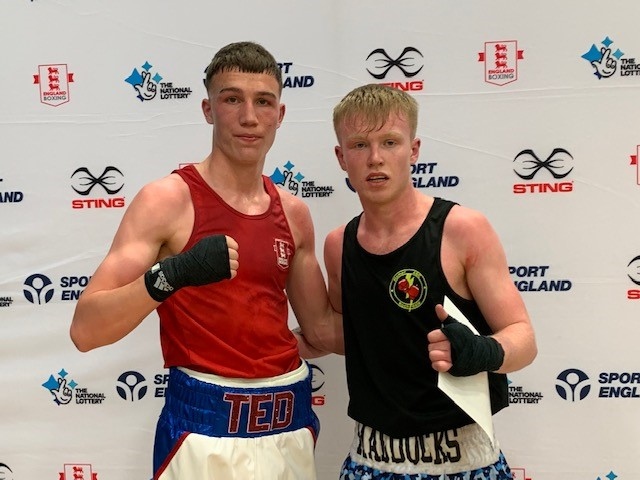 After a long wait, as the weight in was at 9am, and a good walk down the River Thames, Aeron “The Viking” Maddocks stepped out of the blue corner in Ring B at 5.30pm to show his intentions when he landed a terrific left hook to the side of the head of his much taller opponent after slipping Jackson’s long-ranged punches.

Realising Aeron’s power, the Hull boxer used his vast England boxing experience to keep the Hamer boxer at range with his long, swift combinations, before moving off on his toes as Aeron pushed forward. This continued throughout the round, but when Aeron did manage to get in close, he landed another solid left hook to the head.

Before the bell rang to start round two, Aeron was told by his coach Steven Connellan that he may have lost the first round. So, he told him to step up the action and to use his double jab, followed by his right hand to get in close before unloading his hooks to both the body and head.

The bell rang for round two and Aeron immediately stormed into action with a swift one-two combination, which immediately forced Jackson onto the back foot. From there Aeron continued to press the action as he tried to force Jackson onto the ropes to land his powerful hooks.

As the round progressed Jackson’s feet slowly began to tire, which gave Aeron the opportunity to step in closer to his opponent so that he could land the more telling punches, and when he did, all Jackson could do was to hold onto his Hamer antagonist. By this time Aeron had gained his momentum and he landed two more powerful overhand rights to the chin, followed by more swift hooks to the body and head to take the round.

Before going into the third and last round, Aeron was told by his coach that he was back in the contest with that fantastic second round performance, which meant that the bout was up for grabs again. So, Connellan told his Hamer boxer to continue to press forward with his tight guard and force Jackson onto the ropes before landing his hooks.

The bell rang for the last round and both boxers clashed in the centre of the ring, where Aeron landed two more terrific hooks to the chin of his opponent. From there on Jackson began to use clever tactics as he began to hold onto his Hamer opponent for about five seconds every time Aeron stepped in close to try and land more telling hooks. Then Jackson would hold out his arms to indicate to the referee that he wasn’t holding, which immediately stopped Aeron’s momentum.

The round was a very close affair which could have gone either way, but in the end the split-decision verdict went in favour of the England international Ted Jackson who goes onto compete in the final in Manchester on 23 April after he beat Joe Bartell (35 wins, 9 defeats) of Guildford City ABC in the semi-finals.

Hamer coach Steven Connellan said: “Aeron should be very proud of his achievements during these championships. He has boxed and beated some terrific young men along the way, and I can honestly say that it was a true toss of a coin on who won that last contest against Ted Jackson."

The busy weekend didn’t stop there for Hamer Boxing Club, because two more boxers, 14-year-old Austin Heneghan and 14-year-old Charlie Braddock were invited to the England Boxing Junior Open Talent Day at Tamworth Boxing Club in Staffordshire on Saturday 9 April to show off their talent.