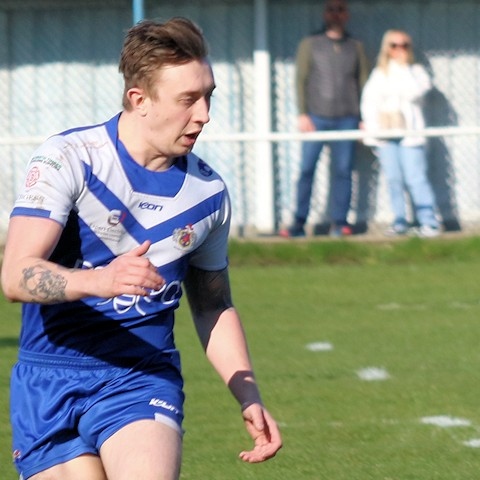 Luke Hartley was strong in defence for Mayfield

After a faltering start to the season, Andy Reed and Craig White have seen their Mayfield NWML side finally come good and they now sit on top of the league following a fine win against the former league leaders Thatto Heath.

There was no indication of the rout to come as both sides fought to get the upper hand for the first 15 minutes. Thatto had a huge set of forwards and two useful halfbacks, It was only strong defence from Luke Hartley, Joe Schofield, Ryan Tetley and Sam Hilton that stopped them getting on the score sheet early in the game. Mayfield settled into a good rhythm and stuck to the game plan set out by the coaches. This began to pay dividends and the tries started to come. Two great plays saw Mayfield score through Kristian McVeigh and Shaun Hurley and at 10 - 0 the team was brimming with confidence.

Kyle Marvin was unlucky not to add to that after a 70m break but he lost the ball as he was tackled near the line. Rob Kershaw then went one better as he went 70m and managed to get the 4 points, converted by Zac Hartley, 16 - 0.

Hartley then added a try of his own with and outrageous step and dummy to make it 20 - 0 at half time.

The second half went much the same way as the first with Thatto, to their credit, coming back at their hosts as they tried to get back in a game that was running away from them. Matty Brown, Hilton and Travis Holden made sure that wouldn't happen with some rock solid defence. So much so that the visitors were dropping like flies, with players struggling to get back into the game at each tackle. McVeigh exploited the gaps that were now appearing as he picked up a loose ball in his own ten and sprinted clear for a try, converted by Hartley, 26 - 0.

Hilton them put Hartley in for his second, again he added the conversion, 32 - 0.

Hartley then turned provider as he put Schofield in for a converted try, 38 - 0.

With the injuries Thatto were picking up it became a non contest so the coaches along with the referee agreed to call the game to an end early and the result will go down as 38 - 0, but in the true spirit of sport three of the Mayfield lads changed shirts and and the game carried on.

Mayfield continued their domination and scored two more tries through McKenna, and Kershaw with an absolute peach as he rolled back the years and sprinted clear from his own line to touch down under the sticks. the scores were converted by Hurley and Brown. That concluded the scoring and the ref called time. 50 - 0