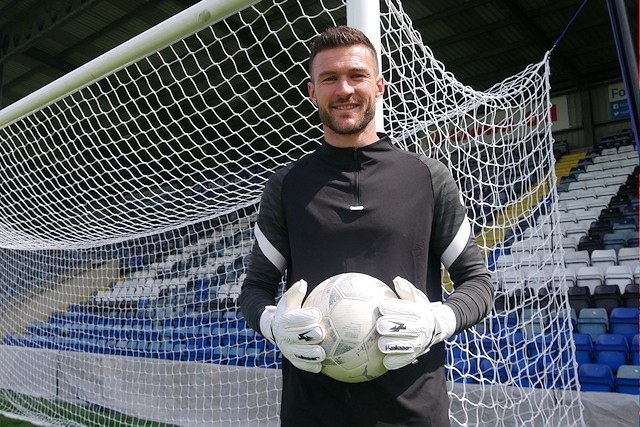 Goalkeeper Richard O’Donnell has become the first new recruit of the summer for Rochdale AFC.

The 33-year-old has signed a two-year deal with Dale, which will come into effect on 1 July once his contract expires at Bradford City.

O’Donnell brings with him a wealth of experience, having notched up over 400 career appearances. During his career he has played for clubs in all three divisions of the EFL - Championship, League One and League Two.

“I had a good chat with Robbie last week, and his plans for the club and the way he wants to play is exciting, so as as soon as I spoke to him we got things done pretty quickly. I’m delighted to be here and looking forward to getting started in July,” said O’Donnell.

“But it’s not just what he said, it’s also what I’ve seen from last year and from the games that Rochdale played against Bradford. The team plays really good football and they try to play the right way. The games that we, when I was at Bradford, played against them, Rochdale probably should have got more from both games. And after speaking to Robbie face-to-face last week and hearing him reiterate that, it was exciting. I’m really looking forward to getting going.”

O’Donnell started his professional career at Sheffield Wednesday, where he came through the youth ranks and made 20 appearances for the club as well as loan spells at the likes of York City, Oldham Athletic and Grimsby Town.

After his departure from Hillsborough, O’Donnell went on to join Chesterfield, before moves to Walsall and Wigan Athletic followed. He then secured transfers which commanded fees to two Championship sides - firstly to Bristol City and then to Rotherham United. From the Millers, he joined Northampton Town before, most recently, switching to the Bantams in the summer of 2018. He leaves Valley Parade after four years, having made nearly 150 appearances.

“I’m delighted to have been able to secure the services of someone of Richard’s calibre,” said Manager Robbie Stockdale.

“He has played in League Two and at higher levels and he was captain of his previous club. In Richard, we’re bringing in a player with leadership qualities and he’ll be an excellent influence around the changing room, which are also aligned with his qualities as a goalkeeper.

“We have a plan in place for recruitment this summer and Richard is the first player with the type of character that we’re looking to bring in.”