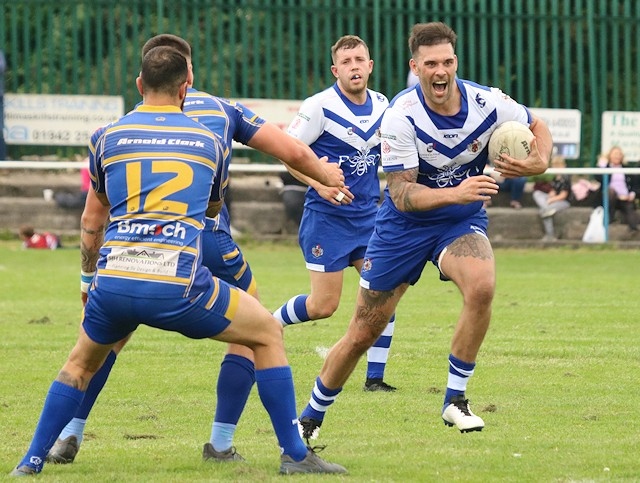 Si Moore was named as man of the match

The game against Pilkingtons on Saturday 21 May was one that Mayfield had to win if they wanted to to show that they are serious about gaining a top six spot come the end of the season.

With less than five minutes on the clock Sam Butterworth's men had stated their intentions as James McDaid and Fin Stewart followed up a speculative kick and McDaid managed to get the opening score for Mayfield, 0-4.

True to form though Mayfield kept their opponents in the game with repeat sets in their own ten. Pilkingtons moved the ball quickly amd found the overlap out wide, the winger used the space well and went in in the corner for a good try which was converted to give his side the lead, 6-4.

Mayfield pushed back and were soon camped in the Pilkingtons 10, putting good pressure on the line. The home side defence held firm and refused to allow Mayfield through but the Mayfield forwards were gaining the upper hand. Nick Hargreaves, Si Moore and Danny Dean pummeled the line but were repelled time and again. James Mulvaney and Rob Kershaw took some good drives and stiffened up the defence, which was lead by the evergreen Wayne English.

Pilks took an age to return from the half time break as their coaches tried to lift them. Butterworth and Steve Wood did the better job in that respect and Mayfield started the stronger, forcing a drop out from under the sticks in the first minute.

With 10 minutes gone, Mayfield were playing well, showing good structure and well executed game plan. Their defensive effort as a team was superb against a massive robust home pack. A great passage of play saw winger Fin Stewart finish the move in the corner, Cole Connolly added the two and Mayfield were back in front, 6-10.

Once again though the home side capitalised on Mayfield generosity with the ball and reclaimed the lead with a converted score, 12-10.

20 minutes to go and Mayfield were in danger of letting another two points slip from their grasp. Pilkingtons piled on the pressure and the Mayfield defence responded well, Harry McDonald and Ben Metcalfe were spoiling their play, not allowing them to build a rhythm. Mayfield followed Si Moore's lead and pushed up field. Once again McDaid showed what a good player he has become as he edged his side in front with a great try in the corner, brilliantly converted by Connolly, 12-16.

Pilkingtons weren't done though and it took a great tackle by Kyle Marvin to keep them out with five minutes to go. Mayfield reacted well and got themselves out of the danger zone and pushing on Pilkingtons' 20 yard line.  A Connolly penalty settled the game in the Rochdale sides favour, 12-18.

This wasn't Mayfield's best performance of the season but it was good enough to seal their first away win of the season. Butterworth was reasonably happy but also acutely aware they could have done better. Darcy Maroske, Dean and Mulvaney stood out in the pack while Connolly, Dec Sheridan and Ben Metcalfe inspired the backs.

Si Moore claimed the man of the match after a blockbuster outing and Butterworth was also pleased with Kershaw and English.