You are Here: Home » News » Sport News » Boxing: Another incredible week of boxing for Hamer ABC

Boxing: Another incredible week of boxing for Hamer ABC 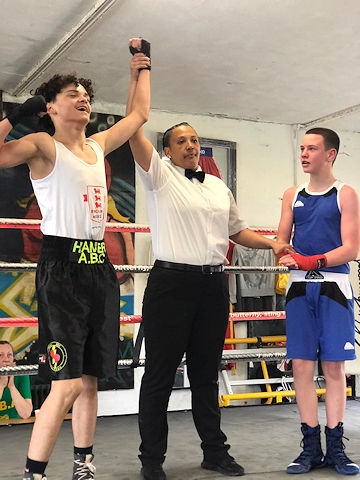 Last week proved to be another incredible week of boxing for Hamer Amateur Boxing Club with several entertaining bouts.

Bethany ‘The Blue Toffee’ Connellan, 23, dusted off four-and-a-half-years of inactivity when she travelled to Bootle Cricket Club in Liverpool on 24 May to meet local girl Rhea Kanu in a highly entertaining bout which went to the Liverpool female due to Connellan’s long period out of the ring.

Aeron ‘The Viking’ Maddocks, 19, also stepped into the ring that same night in Liverpool with two opponents to contend with, including the England International Callum Makin.

The referee constantly stepped in to intervene which ruined what should have been a terrific fight for the supporters.

At the start of the bout, Makin used very swift punches and fast movement to keep his Hamer opponent at bay, but as the fight progressed, Aeron began to find his range as he stepped inside his opponent’s punches to unload heavy punches of his own to both the body and head.

This led Makin to constantly hold onto his opponent whilst the referee stepped in to separate them without warning the Liverpool boxer for holding.

This continued throughout the bout as Aeron tried to get in close, only for the referee to quickly step in and separate both boxers whilst Makin constantly held.

At one point in the fight, Aeron came in to unload punches to both the body and head whilst Makin pushed down upon him: quite incredibly, the referee stepped in to give the Hamer boxer a public warning for ducking his head.

From there on the bout became untidy and frustrating for Aeron as his Liverpool opponent constantly held onto him without any warnings from the referee. Then with only around thirty seconds to go in the third round, the referee noticed a slight cut above the right eye of the Hamer boxer which led them to stop the bout in Makin’s favour.

Hamer head coach Steven Connellan said “The referee was a disgrace. Makin was edging the bout anyway so it didn’t need the official to keep stepping in to stop the action, which frustrated Aeron and his momentum in what should have been a terrific bout for the equally frustrated fight fans in attendance.

“Although it wasn’t the result we wanted, it proved that Aeron was up there with the best in England.”

The action didn’t stop there for Hamer Boxing Club, when 14-year-old Alfie ‘The Charmer’ McKay travelled to The Midland Hotel in Bradford on 28 May to meet another local boxer in the shape of Filip Horvath.

When the bell rang to start the first round, Alfie stepped out of the blue corner to use his swift jab and equally swift footwork to keep his opponent at bay. Then every now and then he stepped in with his double jab, right hand, which landed upon the chin of his opponent before he unloaded numerous punches to both the body and head.

This continued throughout the round as Alfie used every inch of the ring, but every now and then Horvath showed his Hamer opponent he was still in the fight when he landed his solid right-hand to the chin.

Before the start of round two, his coach Steven Connellan told Alfie to keep an eye on his opponent’s right hand and, when he was about to throw it, step back slightly onto his back foot before instantly stepping back into range to unload his own right-hand.

At the start of the second round, Horvath came out stronger when he began to unload his solid right-hand. But Alfie stayed focused and out of range, whilst constantly moving around the ring as he unloaded his own swift punches when his opponent came into range.

At one point Horvath unloaded his right hand, only for Alfie to step out of range before instantly stepping back in with a right-hand of his own which landed upon the chin of his opponent.

Then the Hamer boxer stepped back into the action to unload more solid blows as Horvath tried to cover up whilst trapped in the blue corner.

Alfie and his coach knew that they had the bout won if he was to continue with the same performance in the third and last round, in which he showed great maturity as he constantly used the ring in his favour once again whilst he unloaded fast punches, to take the bout by a unanimous decision.

Two Hamer boxers were chosen to represent the North West Region of England in an international bout against the Republic of Ireland at Tameside Gym in Manchester on Sunday 29 May.

First on was 14-year-old Austin ‘Powers’ Heneghan who stepped out of the red corner to meet Darragh Doody, who stormed out only to be met by continuous right-hands to the chin by the Hamer boxer.

This continued until Austin landed a terrific power punch to the chin of his on-coming opponent, which prompted the referee to step in and administer Doody a standing eight count.

Undeterred, the Irish boxer continued to storm forward, only to be met by swift combinations from the Hamer boxer as he stepped in and out of range.

Doody constantly moved forward with relentless action in the second round, whilst Austin landed continuous right-hands to the chin every time his Irish opponent stepped into range, before he swiftly as he moved around the ring whilst Doody continued to pursue him.

Then midway through the round Austin landed another tremendous right-hand to the chin of his oncoming opponent which led the referee to step in once again to administer another standing eight count.

In the third and last round, Austin used the standing eight counts to his advantage whilst he used the ring with swift footwork and fast combinations to entertain his fans, before the referee raised his hand in victory by a unanimous decision.

When Austin stepped out of the ring, 14-year-old ‘Champagne’ Charlie Braddock stepped towards it, only to be told that his opponent had refused to take the bout. Charlie and his supporters were devastated, as was his coach Steven Connellan, who quickly organised a non-scoring bout for the Hamer boxer at the end of the tournament.

How Charlie stayed focused amidst all of the turmoil was incredible as he waited for four more bouts to end before he could make his way back inside the ring once again, and when he did, he was told that the Irish team wasn’t ready yet, so he had to wait another five minutes or so until his opponent Patrick Carthy arrived.

Somehow Charlie continued to stay focused and strong-minded, which showed what an extremely determined young man he is when he constantly stepped towards his opponent to force the action after the bell rang to start the first round.

This continued throughout the round until the last ten seconds when the Hamer boxer landed a terrific right-hand to the chin, which instantly led to a surge in noise from his supporters.

Charlie upped the pace in the second round as he landed punches to both the body and head.

Then, in the third and last round, Carthy began step up the pace of the action only to be met by a very determined young Hamer warrior, and had the bout been a scoring bout, then Charlie would have left the ring as the winner.

Hamer coach Steven Connellan gave nothing but praise to his Hamer boxers who performed immensely throughout the week against talented boxers from Liverpool and Bradford and a very strong Irish boxing team.