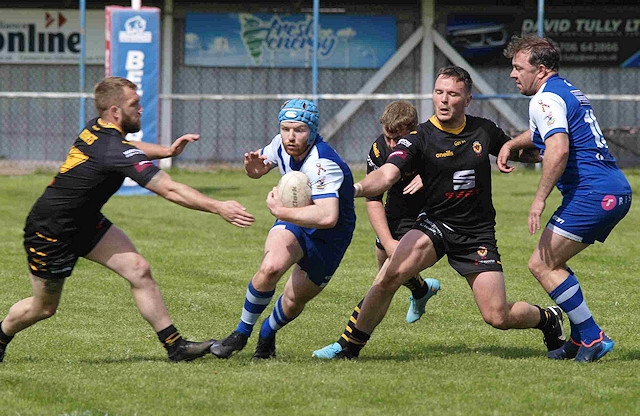 Ben Ratu on the break

Mayfield took to the field on Saturday 4 June with four players missing and were given little chance against a quality Cumbrian side.

Brow came at Mayfield from the whistle but they were rocked back by some powerful defence from Jarrod Dash, Rob Kershaw and Ben Ratu. This start lifted the team and they were soon at the other end of the field where Ratu was unlucky not to open the scoring after he was held up on the line. Mayfield were looking good, but the wheels started to come off as Dash was shown the yellow card for a strong but robust tackle.

Brow showed their pedigree as they immediately raised their game and within a minute had registered a converted try as Mayfield were still trying to restructure, 0-6.

The defence worked overtime as first Ieuan Higgs and Kershaw and then Ratu and Dec Sheridan combined to prevent further scores. The pressure began to tell though and when Brow went again from a scrum for another converted try the crowd feared the worst, 0-12.

Dash's return to the field saw him up his work rate to try and pull back the deficit. He really was working overtime as he put himself around the field. The visitors kept coming though and a weak defensive effort from Mayfield was punished by Brow and they scored again to make it 0-18. It looked at this stage like game over and it was just a matter of how many they would score.

With five minutes to go till half time Mayfield regained their composure and returned to the game plan being outlined by coach for the day Andy Reid. Higgs started to take control of the game and calling the shots and the team responded well. Dash and James Mulvaney got Mayfield into the danger zone and a brilliant kick through from Sheridan was touched down by Higgs. Cole Connolly added the two, 6-18 right on the half time whistle.

Mayfield started well in the second half and looked the better side as they tried to redress the balance. They were on top for the first ten minutes with James McDaid running strongly. A simple penalty allowed Brow to regain their game.

Nobody could fault the effort Mayfield were putting in and on another day effort may have been enough but some poor decision making along with bad luck stopped them winning this game. Three times Mayfield were held up over the line and the result could have been different but it wasn't to be.

A great solo try from Connolly which he converted himself reduced the deficit, 12-18. The lads gave it their all but just couldn't get the next score that would have made the difference.

There were some very good individual performances. McDaid, Dash and Higgs all stood out, but the match sponsors Emma Ramsden and friends split the man of the match between Connolly and Sheridan.