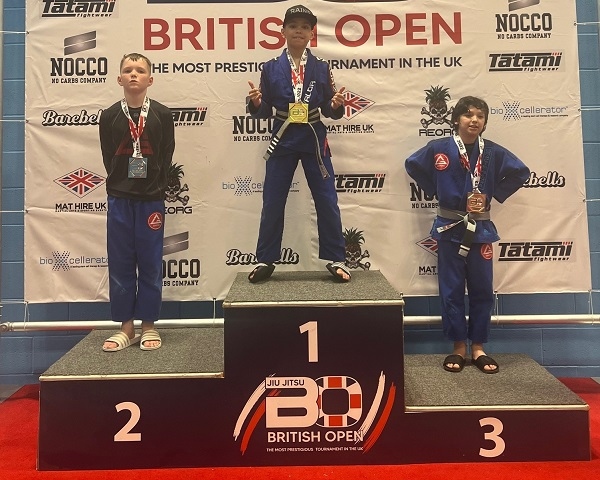 Rochdale’s Andrew Perez has been named British Champion of Brazilian Jiu Jitsu for the second year running after winning gold in his age group at the British Open Champions last weekend (Saturday 4 June).

Andrew won his first fight with a Kimura submission, with his second fight lasting just 40 seconds before he finished his opponent with a rear-naked choke submission.

He competed in the teen 1 category for 12- and 13-year-olds, and also competed in a heavier category to challenge himself.

His dad, Carlos, said: “We can’t thank all his coaches enough, and we also want to thank his sponsors RAINE Clothing Ltd and Valor Fightwear for all their support.”

The Holy Family RC & CE College pupil is also well-versed in Judo and Thai Boxing and has been offered the opportunity to compete in the IBJJF Kids Pan American World Championships in July 2022.

The event is considered one of the most prestigious Brazilian Jiu-Jitsu tournaments in the world and is hosted each year.

Andrew's family is now raising money to help get him to the World Championships in Florida. Any money donated will be spent on Andrew’s travel, food, accommodation, training and entry fees.