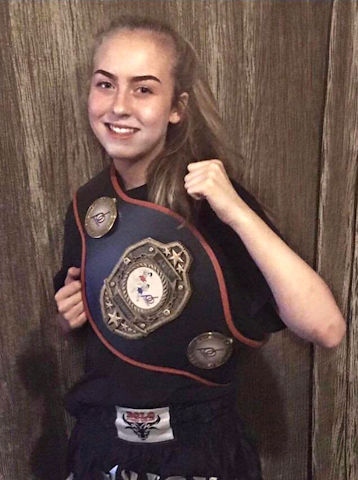 Lauren Phee, 17, has a shot at a world title

A Whitworth Muay Thai fighter is aiming to raise £1,600 to realise her dream of fighting in the world championships in Italy later this year.

Once ranked number two in the UK in the junior rankings, Lauren Phee has been given the opportunity to compete in the WTKA Unified World Championships (Muay Thai and K1) in Italy between 27 and 30 October 2022.

Lauren, 17, has been aiming to reach the championships since she started the sport at eight years old after taking part in a sports festival.

She trains at Wai Kru Thai Boxing in Burnley and also held the junior titles of twice British Champion and North West Champion.

Her mum, Vicky Connellan, said: “We are raising funds for her because this is a self-funding event, and we need to get some money together to help Lauren compete with her teammates and Team GB.

“Lauren has been training and competing in Muay Thai for ten years and she has finally got the chance to go to Italy for the shot to come away with a world title.

“It would be great if we could raise these funds for Lauren, as it would make her day.

“Any help will be appreciated, thank you.”

The funds raised will be used to cover the cost of competing, kit, hotel and travel.