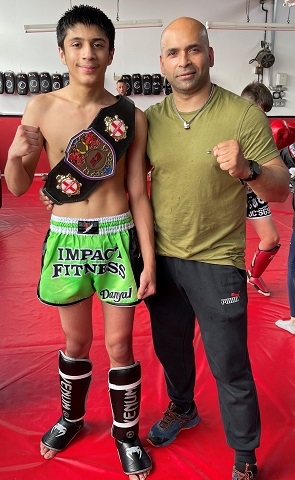 Impact Gym’s Danyal Farooq has been named the English champion for his category after winning the S3 Junior Fight League in Birmingham on 12 June.

After winning the area championship earlier this month, Danyal had little time to get ready for his next fight at 8 Limbs Muay Thai Academy.

The 13-year-old won all five of his one-minute rounds against his opponent, matched by age/weight and ability, in front of a packed-out audience, winning the English championship title.

The Oulder Hill pupil has trained at Impact Gym since he was seven. He trains under Jaman Chowdhury who is qualified as KHAN 13 (kru yai - senior teacher); he is also a fully qualified ABA Coach and owner of Impact Gym.

Jaman said: "On the day there were 40 fights, and Danny was fight 34. Halfway through the show, we found out the fights were running about an hour behind, and it was a hot, sticky and humid day. We had to make sure Danyal didn't get too hot and bothered before getting in the ring.

"He had to put in hours training after school so he was ready for this fight, but he is so dedicated and focused on sport and school."

S3 Fight League is a fight promotion promoting Muay Thai and K1 fights within the UK.