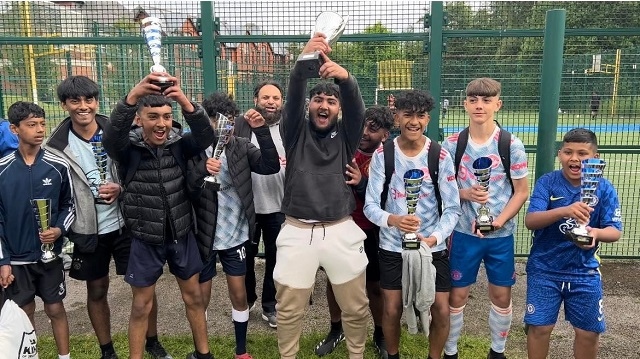 Mosques and Islamic institutes from across the North West came together to participate in an annual football tournament in Rochdale on Sunday 12 June.

The sun was shining, the atmosphere was absolutely electric and there were lots of spectators.

In the end, it was Shaw Maktab who were crowned the 2022 champions. They played brilliantly throughout the tournament and were very tough to beat. The final was against Shahjalal Mosque (Oldham) who were the runners-up and were equally as good.

Similar to the previous year, it went down to a penalty shootout and the winning team’s goalkeeper made some outstanding saves in order for his team to be crowned this year’s champions.

This year, the fair play award went to Nusratul Islam Mosque (Oldham). Some of the criteria looked at include behaviour of teams; listening to the referee as final decision; ensuring there is no litter; and, cleaning up after themselves.

One volunteer at Youth Connections said: “This year we had a lot of parents who attended cheering on their child and really made a day of it. Last year we had 16 teams and this year we had 24 teams.

“We hope to see lots of teams participating next year representing their mosque/Islamic institutes and also enjoy a family day out too.”

One of the parents who praised the event said: “It was my son’s first-ever tournament, his local mosque asked if he would play. It was a fantastic event and really well organised with regular announcements on the mic. The organisers really made sure everyone was happy, safe and enjoying themselves.

“The volunteers really went out their way to ensure the congregational prayer was led as it is an obligatory act in our religion. That itself was a beautiful event and even more beautiful to see that the organisers practice our religion and also show their mannerisms and having good manners is part of our religion.

“A massive thank you to the organisers and look forward to it again next year (God-willing).”