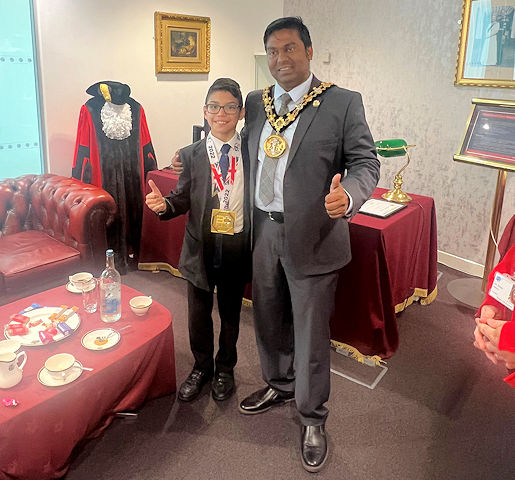 Rochdale Brazilian Jiu Jitsu star Andrew Perez has been presented with an award after meeting the Rochdale mayor, Ali Ahmed.

Andrew was presented with an award for his developments and performance in the sport, which most recently saw him land a gold medal alongside his younger brother, Collin.

The pair, 11 and 10, respectively, both won double gold at the Somerset BJJ Open in Weston-super-Mare on Sunday (26 June).

At the meeting, which included Mayor’s Consort Sultan Ali and Kingsway Ward Councillors Shakil Ahmed and Rachel Massey, Andrew shared some of his experiences in past competitions and what he’s aiming for the future in sport.

The Major expressed how amazed he was with Andrew’s achievements representing the Rochdale borough at such a young age.

Andrew said: “It was a great experience, and I am very proud to keep representing Rochdale across the UK and America.”

His dad, Carlos, added: “Councillor Rachel Massey has been of great support and help with the upcoming world tournament which will be held in America. They have all wished Andrew the best of luck.”

The Holy Family RC & CE College pupil is also well-versed in Judo and Thai Boxing and has been offered the opportunity to compete in the IBJJF Kids Pan American World Championships next month.

The event is considered one of the most prestigious Brazilian Jiu-Jitsu tournaments in the world and is hosted each year.

Andrew's family is now raising money to help get him to the World Championships in Florida. Any money donated will be spent on Andrew’s travel, food, accommodation, training and entry fees.