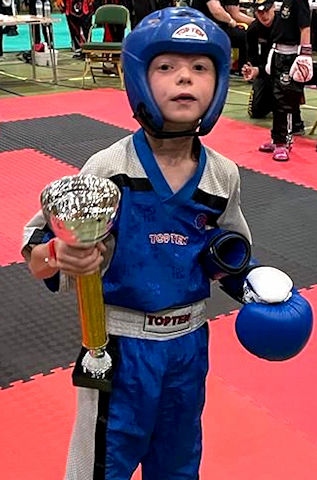 Dylan Kershaw has been chosen to represent England

A young kickboxer from Middleton has launched a £1,000 fundraising quest so he can compete at the World Kickboxing Union (WKU) world championships in October – just under 12 months after taking up the sport.

Nine-year-old Dylan Kershaw has been chosen to represent England at the tournament in Cardiff after finishing second in his points fighting and continuous fighting categories at the WKU British Open Championships in May.

The Elmwood Primary School pupil hopes to meet his target to pay for his training regime, travel, kit, and entry costs.

Dylan, who competes in the minus 25kilo, under-10s category - the sport’s youngest, lightest division - says: “It would mean a lot to me to help make my dream come true and show England what I can do.”

The win makes him the IBKO’s British champion in his age group and adds to his continuous fighting and points fighting titles he won at the International Combat Organisation (ICO) championships.

Points for continuous fighting are awarded as the duel takes place in the same way as boxers are scored, while points fighting focuses on technique and sees the referee stop the contest and re-set the fighters with each point that is scored.

Dylan, who holds a green belt after being fast-tracked through his white, yellow, orange, red and red stripe belts, has already attended one of four England training camps in Birmingham, although he is due to miss one in August when he is competing at the Scottish championships.

He trains at the British Military Martial Arts (BMMA) centre in Altrincham four times-a-week, following in the footsteps of his older brother Harley, 13, a blue stripe belt who has been kickboxing since he was nine. He too is no stranger to success, holding two WKKC British titles in the minus 35kilo, under-13s division, and who joined his brother on the podium when he collected two golds, one silver and one bronze at the IBKO championships.

Dylan’s dad Gaz, a saw operator and FLT driver at Hill’s Panel Products (HPP), the Oldham-based board, doors and fittings supplier and manufacturer, said: “I’m very proud of the lads. Every time I watch Dylan get in the ring or on the mat, I feel proud no matter what the outcome is. It takes a lot of courage to do something like that – to stand up in front of people and compete, it’s brilliant.”

Dylan will be joined at the world championships by fellow BMMA nine-year-old Dacre Bilton, from Chadderton, who competes in a heavier weight category. Both boys have launched GoFundMe campaigns to raise the money needed to attend the event at the Sport Wales National Centre.

Gaz said: “We’ve got off to a good start after Dylan’s school publicised his appeal. We don’t even know some of the people, they’re teachers and other parents. That’s helped us a lot and we’re very grateful.”

Meanwhile, Dylan will continue his training under the watchful eye of his coach and dad Gaz, and he’ll be cheered on in his exploits by mum Donna, brother Harley and younger sister Scarlet, seven, who has taken up gymnastics after deciding kickboxing wasn’t for her.

You can sponsor Dylan by visiting his fundraising page here.