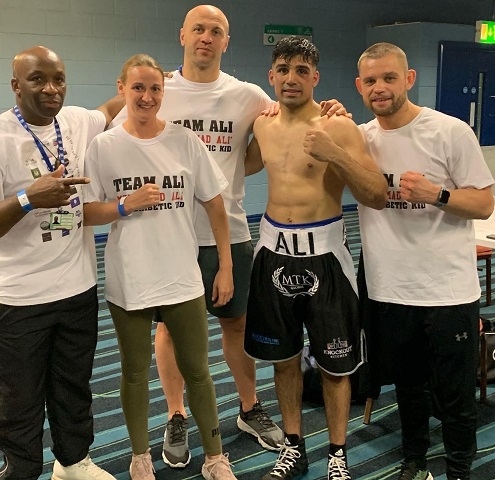 ‘The Diabetic Kid’ won each one of his six rounds against opponent Phil Price on Friday 1 July at the University of Bolton Stadium.

Ali, who trains at Salford’s Oliver’s Gym, said: “I really enjoyed the fight; mixing my shots nicely and hitting the body as well as the head. I’m looking to keeping busy and hopefully fighting in September. I want to keep busy and build momentum so I can create history for a second time by becoming the first diabetic champion.

“I want to thank all the fans who came out to support me, a lot of people came from Rochdale. I’d love to box for a title at Rochdale football ground; that’s my dream. Rochdale getting behind me means a lot to me and I’d love to put a show on at home for them in the near future.

“I want to thank my coach Humphery Harrison for all the hard work and training. Also thanks to all my sponsors for supporting me; without their support, my journey isn’t possible.”

Read more: Type one diabetic boxer from Rochdale first to be granted professional licencePublished: 09 May 2018