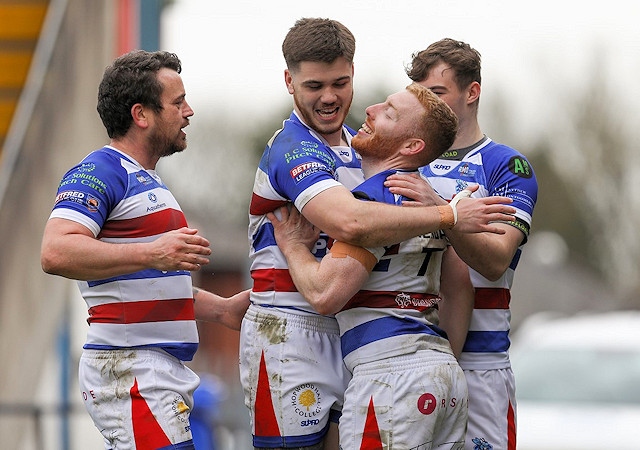 Rochdale Hornets survived a second half onslaught, from Midlands Hurricanes, to record a 42-34 victory on a frantic afternoon in Birmingham.

Hornets had gone racing into a 22-0 lead, after four tries in the first 13 minutes, but were made to work tirelessly – in order to secure the two points.

For the second week in a row, Hornets flew out of the traps as Rob Worrincy continued his good try-scoring form with a score after just three minutes.

Debutant Kieran Rush wasted no time in getting into his stride either, and his line break laid the platform for Lewis Sheridan to register the second try.

The scrum-half then turned provider for Hornets’ third try as he broke from deep, before picking out Gregg McNally who ran in untouched from halfway.

It was then the turn of Zac Baker to get on the scoresheet, as the second row powered over for his second try in as many games.

Hurricanes then began to piece some phases together and were soon rewarded with a try for Alex Sutcliffe – the centre holding off the Rochdale defence to score in the corner.

The hosts grew in confidence as a result of the try, but it was still Matt Calland’s side who struck next – through Ben O’Keefe.

In his first appearance, since re-joining the club, the Wigan centre latched onto a Dan Nixon kick and sped away from the cover defence to score Hornets’ fifth try.

The Midlanders were able to register a second score before half time though, when Tyler Walton reacted quickest to dive on Liam Welham’s kick into the in-goal area.

And it was Dave Scott’s side who got the opening score of the first half, with Phil Cowburn going through to score - off the back of a set restart.

The spirited fightback continued when Hayden Freeman went the length of the field to score a breakaway try, that moved his side to within a score.

With the pressure mounting, Hornets recognised that they needed a try and got it in the form of Sheridan; the Midlands defence were left for dead as the scrum-half skipped through for his second of the afternoon.

Then, a second try for O’Keefe - set up by a brilliant break from McNally - looked to have secured the win for Hornets with just ten minutes remaining.

But two tries in just three minutes, for George Collins and Kieron Lawton, brought Hurricanes to within two points to ensure a nerve-wracking finale.

The Lancashire side took full advantage of the territory, with O’Keefe going over from close range to secure his hat-trick and a hard-fought victory.

Hornets now face an intense week of training as they prepare for Sunday’s local derby against Oldham (3pm kick-off).