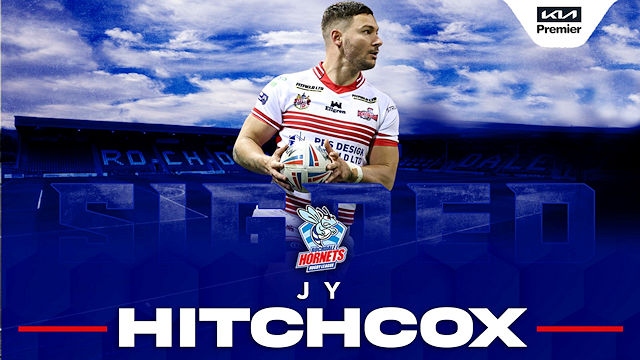 Jy Hitchcox has signed to Rochdale Hornets on loan for the rest of the 2022 campaign.

Hornets were able to acquire the services of Hitchcox, earlier in the season, on a two-week loan and the former Castleford man did not disappoint.

The Australian impressed on debut, despite Hornets suffering defeat at Cougar Park, and went on to register a fine hat-trick - the following week - in the 46-28 win over Doncaster.

His try-scoring capabilities came as no surprise given the 21 Super League tries he scored in 2017, which were pivotal in winning Daryl Powell’s side the League Leaders’ Shield.

Since then, he’s continued to run in tries at the top end of the championship – and was part of the Toulouse Olympique side which won promotion to Super League last season.

Hornets Head Coach, Matt Calland, is thrilled to have Hitchcox back for a second stint at the club – as his side aim to win promotion to the Championship.

He said: “Jy was great for us in his short spell last time, so it’s great to have him in for this crucial part of the season.

“He adds valuable experience on the edge, reads the game brilliantly, and is a class finisher. Welcome back, Jy!”

Chairman, Andy Mazey, is also delighted to have a player of Hitchcox’s calibre back.

He said: “It’s a massive coup for Rochdale Hornets to secure the services of one of the top performing outside backs outside of Super League, in recent years.

“That might sound like a bold statement but it’s absolutely supported by Jy’s stats - and performances - at the very top end of Championship, with the likes of Toulouse and Bradford, as well as in Super League with Castleford.

“Jy has been unfortunate to find himself just behind the likes of Blake Ferguson and Krisnan Inu, in the pecking order, this year at Leigh and his game time has been limited as a consequence.

“He’s a player Matt really enjoyed working with, in his previous stint here; plus, his experience of top-level rugby league makes him a great person for our young players to learn from.

“We have worked extremely hard to reach an agreement with Leigh and I must thank Chris Chester for his support on this. Welcome back Jy”

Hitchcox will come straight into contention for Sunday’s game at Oldham.