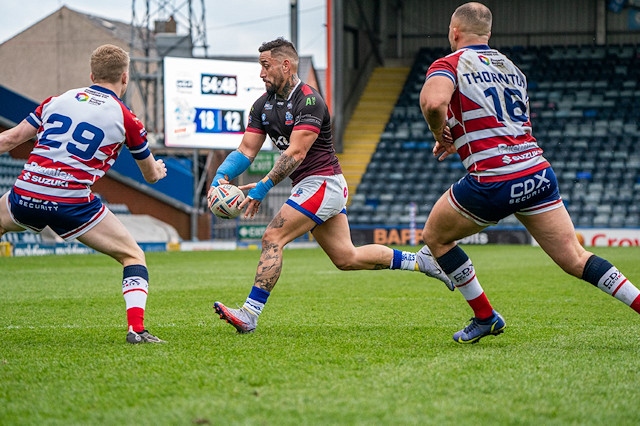 Rochdale Hornets hit a spectacular 44 unanswered, second half, points to come from behind and beat local rivals Oldham 24-50 – at the Vestacare Stadium.

A sloppy first half performance had seen Hornets go in 24-6 down, at the break, but a hat-trick for Rangi Chase – along with a brace for Fenton Rogers – meant they were able to secure a memorable league double over their closest neighbours.

The added intensity of a local derby was evident from the outset with very little quarter given, and both defences on top, in the opening ten minutes.

However, after Hornets were penalised for a high tackle, the hosts began to pile pressure on the Hornets line and soon had the game’s first try – in the form of Jordan Andrade.

Despite Hornets not yet clicking into gear, Chase was already looking a threat and won Hornets a great attacking scrum position when Oldham failed to gather one of his testing high balls.

From the scrum, Chase then skipped through the Roughyeds line to register his first try of the season; Gregg McNally added the extras to level up the scores at 6-6.

As the game approached the half-hour mark, Oldham began to find holes in the Hornets left edge.

Liam Copland took full advantage of this, racing in to score Oldham’s second try before setting up one for Calvin Wellington with a well-placed chip over the top.

A fourth try, just before half time, for debutant Jonathan Openshaw meant that Hornets had it all to do when they came out in the second half.

Matt Calland’s side looked as though they’d got off to the perfect start, when Lewis Sheridan, scored on 43 minutes but were dealt a huge blow when McNally was forced to come off injured after the conversion.

Having also lost the returning Jy Hitchcox, to a head injury, Rochdale were forced to re-jig their backline.

Things became more complicated when Joe Taira was then sin binned for an altercation with Emmerson Whittel, who was also yellow carded.

However, Hornets were unfazed by this and soon scored again after a fine break by Ben Calland.

Just four minutes later, Rogers would get his first try with a typically dominant carry to breach the Oldham line.

It was then time for another moment of Chase brilliance.

The extravagant halfback broke the Roughyeds line on halfway, before side-stepping Owen Restall to go in under the posts.

Ben O’Keefe, now in charge of kicking duties, added the extras to move the visitors into a shock lead.

With their tails now up, Calland’s side began to dominate both territory and possession.

A scrum just ten metres out saw Kieran Rush make a smart break, before putting in Rogers for his second try of the afternoon.

This left the hosts eight points behind, with just 12 minutes remaining, and their task became even more difficult when Luke Nelmes was yellow carded – meaning they’d have to finish the game with 12 men.

The first of which saw Chase complete his hat-trick after a powerful break from Gavin Bennion.

Then, O’Keefe got a try of his own, before Bennion himself got on the scoresheet with the final act of the game.

The Wigan Warriors loanee added the extras, once again, to bring up the half century and cap off an unforgettable afternoon for Rochdale Hornets.

Hornets now face a bye week, but will be hoping to keep this scintillating form going when they host London Skolars on Sunday 24 July at the Crown Oil Arena, 3pm kick-off.