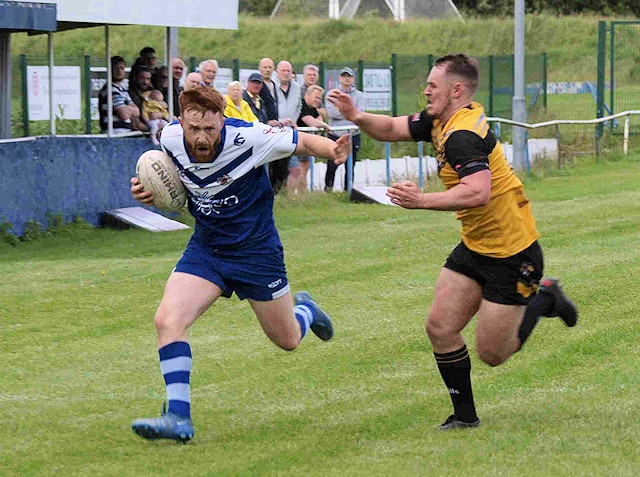 James McDaid is back in the running this weekend

Mayfield were handed a lesson in every sense of the word last weekend as visitors West Hull dominated the game from start to finish.

There were few bright spots for the coaches in this game as Wests opened the scoring after just four minutes and scored tries at regular intervals as a once again understrength Mayfield struggled to match the league leaders. With several players missing, Mayfield were off the pace in the halves and out-muscled in the forwards. The lads on the park did their best but Wests were far too quick too fit and too well disciplined. Dec Sheridan scored Mayfield's only try and man of the match Ieaun Higgs added the conversion. The final score was 6 - 44 and that was probably a fair reflection of the game. It could have been worse but for a spirited second half from the home side.

Coaches Sam Butterworth and Steve Wood are looking for massive improvements this weekend and looking at possibly fielding a couple of new signings in two local lads who have just been released from their respective clubs. They are still missing several regular squad members through injury and holidays so will just have to make the right preparations and approach the game in the right frame of mind.

It will be a tough outing this Saturday at third placed Hunslet Club Parkside; they are a tough uncompromising outfit who play hard with a big set of forwards and two useful halfbacks. Mayfield faced Hunslet at the beginning of April at the Mayfield Sports Centre and were unlucky to go down 18 - 22 in a close, hard fought contest. The coaches will be looking for a similar effort from their side today but hoping for a turn around in the result.

Andy Reid and Craig White also take their side on the road this weekend with a trip to the Hood Lane Recreation Ground in Warrington, the home of Crosfields. This promises to be a great game of rugby league with Mayfield top of the division and their opponents in third place with games in hand. A win would go a long way to helping Mayfield see their dream of finishing top come true. Andy has a young side again with the core of the team being his U18s side, but they are full of the confidence of youth especially after clocking up over 100 points in their last two games with less than twenty conceded. With this in mind they will go to Warrington with only one thing on their mind, winning.