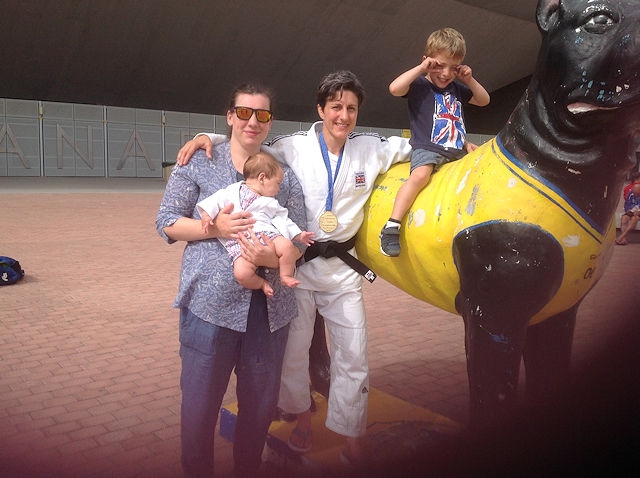 Sophie Cox with her wife Kat and their children

Twenty years ago an aspiring 19-year-old GB judoka received the exciting letter telling her she had been selected to represent Team England Judo in the XVII Commonwealth Games to be held in Manchester.

“The opportunity to compete at a home games was exhilarating,” said Sophie, of Rochdale, ”and the excitement, public enthusiasm and sheer joy of competing in front of family, friends and fellow athletes is an experience that I have never forgotten.”

“It has been an interesting, challenging, eventful but enjoyable journey to this point in my life,” Sophie continued, “and I feel privileged to be part of this talented England Team. Judo is not always included in the games schedule, so this is an opportunity to showcase the sport, a sport that I promote not only at elite level but with the five year olds at Bacup Judo Club.”

Sophie carried on: “Team England’s all time judo tally for the games currently sits at 28 golds, eight silver and six bronze medals, and we are confident of significantly improving on that number, though arch rivals Scotland will be pushing us to the limits.

“But my memories of 20 years ago are more than winning medals, important as that is for the funding and future development of the sport. Manchester was promoted as the friendly games. I remember a games village buzzing with excitement and fun, and a public that gave us its wholehearted support.”

A snapshot of Sophie’s Commonwealth Games memories from Manchester 2002

The disappointment of losing the semi-final but relief in winning a bronze medal in front of family, friends and club supporters.

Participating in the opening and closing ceremonies with all the Commonwealth athletes – the ‘wow’ factor of the entire spectacle!

Many surprise meetings - challenging England rugby sevens coach Joe Lydon with “You won’t remember me...” and his reply: “I remember you Sophie from Wembley 1993.” Joe was captain of the victorious Wigan team in the RHFL Cup final; I as a nervous 11-year-old had just created history by becoming the first girl to play in the U-11 curtain raise, for Rochdale Schools.

Fun time with the NZ sevens team, meeting up with the great Eric Rush. Then I linked up with Patrick Sanderson England RU star who had been a member of Littleborough RUFC when I captained the U-9s there.

Years later, on the balcony of Rochdale Town Hall with Steve Cram to welcome the Queen’s Jubilee baton entering the square, remembering my younger sister Roz running in the 2002 Commonwealth Games baton relay.

Final word from Sophie: “I’m sure I will have equally enjoyable memories from Birmingham 2022: let the games begin!”

Sophie brings a wealth of knowledge and experience to her coaching role, with life experiences that extend beyond the 'elite bubble' of national representation. “After finishing seventh at the Athens Olympics, I found I was not enjoying my fighting like I used to,” she explained.

“I went to Thailand for four years, teaching English in the British International School in Phuket, then in a Thai secondary school. Getting away from the tight-knit pressurised environment of elite sport gave me a different perspective and helped to broaden and develop a wide ranging skill set such as mental resilience, independence, understanding, tolerance, imagination and assertiveness. I use these in coaching at all levels, all abilities, ages and genders.

“On returning to the sport, I experienced the thrill of the London Olympics, and the disappointment of losing to the eventual gold medallist in the first round. I decided to 'retire' in 2013, looking back on a career of being national champion four times at junior level and seven times at senior level, two European silver medals, two European bronzes and a record of competing for GB at every major and senior competition abroad.

“For six years I then travelled the country and the world delivering seminars and presentations about my experiences in elite sport. I was a sporting mentor, worked for Sky Sports Living, Us Girls and the Dame Kelly Holmes Trust. I visited schools under the government’s initiative of addressing mental health issues. I initiated the first female fighters camps in the UK. And, along the way, I managed to win two professional BJJ and three European judo masters titles.

“Coaching at the Commonwealth Games will be a significant highlight of my career so far. But just as important to me is my coaching at Bacup Judo Club with the legendary Brian Moore, where I have been a member since the age of eight. This is where it all began – running up those stairs above Bacup Library.

“I am now settled in Rochdale with my fantastic supportive wife Kat, and our seven-year-old son and three-year-old daughter are already on the mat at Bacup under the watchful eye of junior coach Marie Edwards.

“Since the retreat of Covid, I am busy every other weekend for England Judo organising competition trips abroad to such destinations as Spain, Italy and Croatia. A number of promising judoka from Bacup are already in the England squad. Olympic glory might beckon for some – but friendship and fun are there for all.”